Evolution of the Great North Road

As you browse this website you will soon see we use the term Great North Road in a rather loose way.

Depending on the century you may or may not have visited Royston, Lincoln or York as you travelled the length of the country. There is a braid of routes and we aim to be as inclusive as possible!

It will be helpful to summarise the main variations seen over time.

These are the names given (retrospectively) to the Roman roads from London to York, and from York to Scotland.

There is evidence for the routes in the Antonine Itinerary and also in the archaeological record of towns, forts, bridges and the road itself.

The Antonine Itinerary is ambiguous in many respects, including its date of origin and the identity of some of the places mentioned. None of the 15 British itineraries corresponds directly to our road – but sections are covered in several of them. For instance Iter V includes Godmanchester, Peterborough, Lincoln, York, and Catterick (but the route starts in Chelmsford and ends in Carlisle). 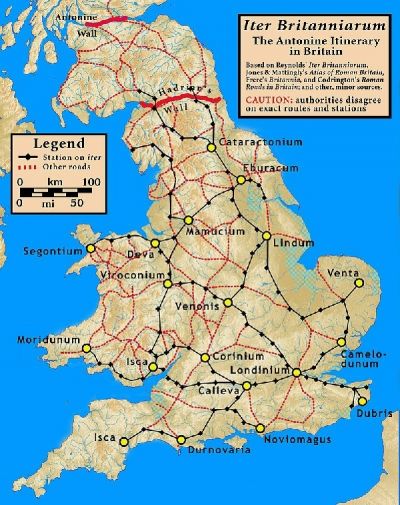 The usual interpretation of “Ermine Street” is from London to York via Godmanchester, Lincoln,  and a ferry across the Humber at Brough. There was an alternative inland route, avoiding the ferry, which would have passed through Doncaster.

North of York, “Dere Street” led to Hadrian’s Wall near Corbridge and on towards central Scotland via an inland route.

The medieval route to York followed the line of Ermine Street above. What is sometimes known as the Old North Road left London via Waltham Cross, Ware, Royston and Huntingdon. Over time the main route north avoided Lincoln and steered via Grantham, Newark and Doncaster. Interestingly, this is the road described by Ogilby in 1675.

The classic Great North Road following a more westerly southern route emerged in the late 17th century. It leaves London via Highgate, passing through Stevenage, Baldock and St Neots before merging with the “Old North Road” at Alconbury. 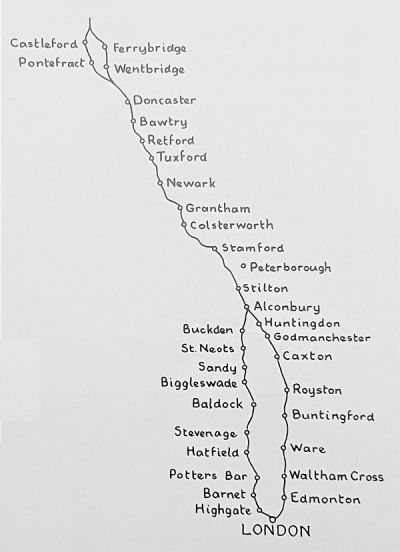 Further north there were changes too, with those not travelling to or from York preferring to take the more direct route from Pontefract to Wetherby.

Unlike the Roman Dere Street the more recent roads have routed via Newcastle before following either a coastal or sometimes an inland route to Edinburgh.

The 20th century road continued the evolution – taking the line of the Great North Road but progressively by-passing virtually all the cities, towns and villages.

Cycling the Great North Road became a popular past time in the late Victorian and early Edwardian period. Today’s car and truck drivers should perhaps.....

George Brown was test rider for Vincent in their heyday and in 1961 took the Standing Start Kilometre World Record for up to 1000cc machines with an.....