The Tyne Tunnel (1968 & 2011) to the east of Newcastle near Jarrow, and the Blaydon Bridge (1990) near Scotswood to the west are the most recent main crossing points of the Tyne. However, for the previous 2,000 years the river was crossed close to what is now the centre of Newcastle.

The Romans built the first bridge over the Tyne in around AD 120 – at about the same time as Hadrian’s Wall. It is sometimes referred to as Pons Aelius, after the family name of Emperor Hadrian. The bridge would probably have been of wood with stone piers.

The first stone bridge was constructed at the same location in the 12th century, surviving until a flood in 1771. The bridge included shops, houses and a prison. The “Georgian Bridge” was opened ten years later. This in turn was replaced by the “Swing Bridge” in 1876 in order to ease restriction on boats travelling upstream.

In 1849 the “High Level Bridge” enabled those on the Great North Road for the first time to avoid the steep descent and ascent which had proved a challenge for centuries. The bridge was designed by local engineer Robert Stephenson with the primary aim of carrying the railway. A roadway was carried beneath.

The iconic “Tyne Bridge” came in 1928. The granite towers at either end were designed as warehouses and have no structural relevance to the bridge.

About the River Tyne

The River Tyne is fed from moorland streams from the Scottish borders and the north Pennines. It’s visited by breeding Atlantic Salmon and sea trout. It is home to otters, water voles and freshwater pearl mussels.

That’s now, but it’s not how the Tyne has appeared to centuries of travellers who crossed the river as they journeyed north and south through Newcastle. Frankly, it has been one of the most polluted of English rivers.

The Romans were amongst the first to leave their mark as they exploited lead deposits in the Pennines. The growth of the coal trade, ship building, heavy industry and the expansion of Newcastle progressively worsened the situation.

The Parliamentary candidate for Newcastle in 1774, Captain Phipps, reported that the Tyne had been converted into a “cursed horse-pond” through ignorance, inattention, and avarice. The situation only got worse. Total depletion of dissolved oxygen was recorded on 16th October 1912. In 1933 the Joint Committee of the local authorities on Tyneside and the Tyne Fishery Board issued a report describing conditions in the estuary as “nauseating and thoroughly objectionable”… “the saturation point when untreated sewage can be discharged with safety into the estuary has been reached and passed”. 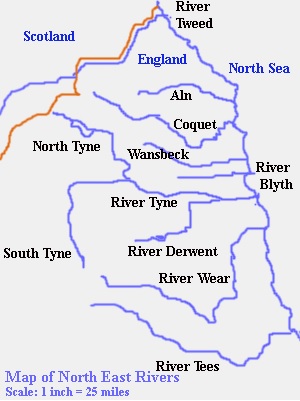