The Banks of Scotland

The Banks of Scotland and the Great North Road

Edinburgh’s banks have long been at the heart of the city’s success. The Great North Road was the basis of communication between Britain’s two leading financial centres as they developed their international reputations.

About The Banks of Scotland

Edinburgh is arguably the second financial centre of the UK and at its heart is a banking tradition which goes back to the 17th century and the foundation of the Bank of Scotland. Scottish bank notes have helped retain the separate identity of Scotland since they were first issued in 1695.

Coins were being minted in Edinburgh, Berwick, Roxburgh and Perth from the mid 12th century. These were silver pennies or “sterlings” similar to coins issued in England. Silver groats (four pence) and half-groats appeared in the 14th century. The “moneyors” producing these coins would be appointed by royal authority, accounting for the profits of the coinage to the royal treasury, being remunerated by fees according to the amount coined. The first dated coin was a gold ducat issued by James V in 1539; it shows the king in a flat cap and was referred to as a “bonnet”.

By the 17th century the merchants and the goldsmiths were providing a simple form of banking in Edinburgh. Some of the more prosperous merchants were willing to extend short-term credit to others to cover the period between buying and re-selling goods. Along with goldsmiths they also acted as money changers and dealers in foreign exchange. As in England increasing trade and the growth of new enterprises put pressure on the small scale and dispersed nature of the banking system and new institutions were required.

A year after the Bank of England had led the way, the Bank of Scotland was established in 1695 as a joint-stock bank with limited liability by an Act of the Parliament of Scotland. The bank had a monopoly on public banking for 21 years. The bank was prohibited from lending to the government without parliamentary approval so its primary focus was to support Scottish business. The bank was viewed with suspicion as being a supporter of the Jacobite rebellions which aimed to reinstate catholic Stuart monarchs to both Scotland and England. This suspicion stimulated the establishment of a fierce competitor in 1727 in the form of the Royal Bank of Scotland.

The third leg of the Edinburgh banking industry came 19 years later when The British Linen Company (later the British Linen Bank) was established in Edinburgh by royal charter in 1746. Although its initial aim was to promote the linen industry, the company moved into banking in the late 1760s, and began issuing its own notes. Empowered to “carry on the Linen Manufactory in all its branches” its branch network was a precursor to the structures adopted by many banks over the following centuries.

The ill fated acquisitions made by Bank of Scotland and Royal Bank of Scotland meant that by the time of the 2008 financial crisis brands such as Halifax, NatWest, Lloyds and Coutts all led back to an Edinburgh head office.

Distinctive Scottish bank notes are still issued by 3 banks. They are a curiosity in that it is not common within a single currency zone to allow printing of notes by authorities other than a central bank.

Immediately after opening in 1695 the Bank of Scotland began issuing notes, initially with denominations of £100, £50, £10 and £5. A £1 note (twenty shillings) was introduced in 1704. As trust in the bank grew notes started to circulate beyond the business community and wealthy individuals. Scotland became one of the first countries in the world to use paper currency from choice. The Royal Bank of Scotland added its own notes from 1727, and issued the first coloured Bank note in the world in 1777.

Stamp Duty was first levied on bank notes in 1783 when the British government was looking to raise funds for the American War of Independence. Under the Act the paper had to be stamped before each note was printed. Stamping the paper was a lengthy process as it involved the Scottish banks travelling the length of the Great North Road to the Stamp Office in London. In 1808 the Scottish banks were granted the concession of issuing their notes on unstamped paper and paying the duty in a lump sum.

Contrary to popular understanding Scottish notes are not and never have been “legal tender” (other than under special provisions enacted during the two world wars).

The building above is Dundas House located in St Andrew Square. It was acquired by the Royal Bank of Scotland in 1825 and became its headquarters. 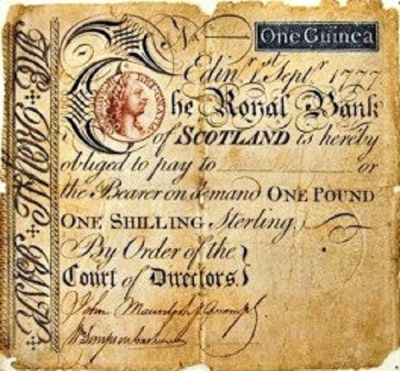