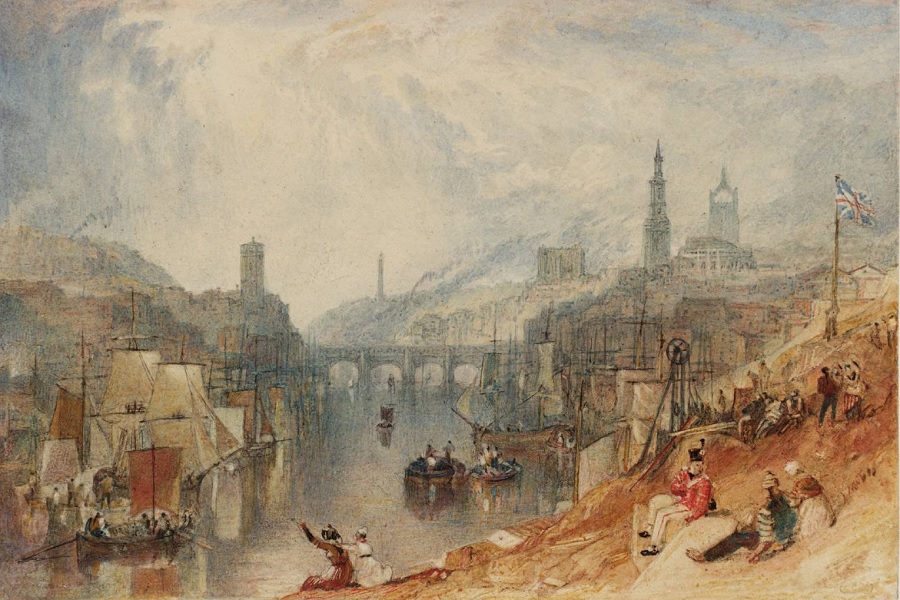 Newcastle and the Great North Road

The Great North Road from the south approached Newcastle via its less glamorous neighbour, Gateshead. Things have improved for Gateshead in recent years but it has attracted unfavourable comment over the centuries. Charles Harper in 1901:

“Gateshead is nowadays a great deal worse than it was when Doctor Johnson called it “a dirty lane leading to Newcastle.” It may be ranked among the half-dozen dirtiest places on earth, and the lane which the Doctor saw has sent forth miles of streets as bad as itself, so that the geographical distribution of filth and squalor has in modern times become very wide.”

Once across the river, coaches were faced with a steep ascent to the city centre from the Quayside. The road turned east to Sandhill, now the site of the Guildhall, and crossed a small stream with a tidal inlet called the Lort Burn. It then climbed Akenside Hill (once called Butchers Row) and then doubled back to continue the climb up Pilgrim Street, which led into Northumberland Street.

North from Newcastle, the Great North Road runs along the eastern edge of the Town Moor into Gosforth High Street. The old road meets the A1 (Newcastle Western Bypass) at the western end of Newcastle Racecourse but continues northwards through Wide Open before crossing “Six Mile Bridge” and onwards through Seaton Burn.

Newcastle is the 6th city of the UK. An energy rich frontier town which held strategic importance for much of the past 2,000 years. Centre of a community sufficiently separated from the rest of the country that a distinctive culture and dialect have been maintained.

The first recorded settlement was Pons Aelius, a Roman fort and bridge across the River Tyne founded by Emperor Hadrian in the 2nd century AD (and given his family name). Hadrian’s wall spanned the width of Britain from the Solway Firth in the west to Wallsend (Segedunum) in the east. 74 miles long it was built to prevent the incursion of Pictish tribes from the north. Remnants of the wall are still visible in parts of Newcastle.

In 410, Newcastle became part of the powerful Anglo-Saxon kingdom of Northumbria, and became known throughout this period as Monkchester. Robert Curthose, son of William the Conqueror, erected a motte-and-bailey castle in the year 1080 and the town soon became known as Novum Castellum or New Castle. Newcastle Castle Keep remains as the oldest structure in the city.

A 7.5m stone wall was built around the town in the 13th century, to defend it from invaders during the Border war against Scotland. Newcastle was successfully defended against the Scots three times during the 14th century. During the 1540s, war with France and the threat of invasion prompted a strengthening of fortifications at Tynemouth, 8 miles down river from the city. Italian military engineers were employed and this plan from about 1545 was by Gian Tommaso Scala. 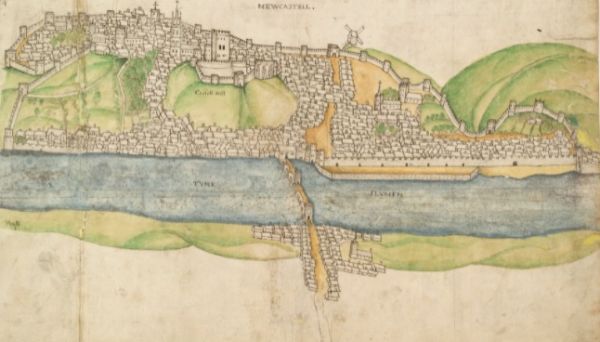 Coal had been shipped from Newcastle since the 13th century and during subsequent centuries it came to supercede other commodities such as wool and timber. From 1530 a royal act restricted all shipments of coal from Tyneside to Newcastle Quayside, giving a monopoly in the coal trade to a cartel of Newcastle burgesses known as the Hostmen. During the civil war in 1644 Parliament blockaded the Tyne to prevent the king from receiving revenue from the Tyne coal trade; the upshot was that London suffered a hard winter of fuel shortages.

The wealth generated from the coal trade – along with its value in industrial processes helped lead to the growth along the Tyne of other industries such as glass, and later iron and steel.

In the 19th century local innovators and entrepreneurs provided the foundation of technologies which would change the world. George and Robert Stephenson were hugely influential figures in the development of the early railways. Joseph Swan demonstrated a working electric light bulb about a year before Thomas Edison. Charles Algernon Parsons invented the steam turbine, for marine use and for power generation. William Armstrong invented an hydraulic crane.

Apart from giving Newcastle its original name, the bridge over the Tyne has been of huge commercial and military significance – and its various incarnations have symbolised the city.

The medieval bridge built in 1250 supported various houses, three towers and a chapel. A blue stone placed in the middle of the bridge marked the boundary between Newcastle and the Palatinate of Durham. After a flood in 1771 a new bridge with 9 arches was constructed; this remained in use until the 1870s, so is the one which would have carried the Great North Road coaching traffic. It was replaced by the Swing Bridge which still survives.

Built to carry the new north-south railway, the High Level Bridge over the Tyne was built in 1849 by Robert Stephenson; it included a lower deck to carry road traffic. To ease pressure on the other crossings the new Tyne Bridge supported by a 162m steel arch was completed in 1928.

Newcastle Then and Now 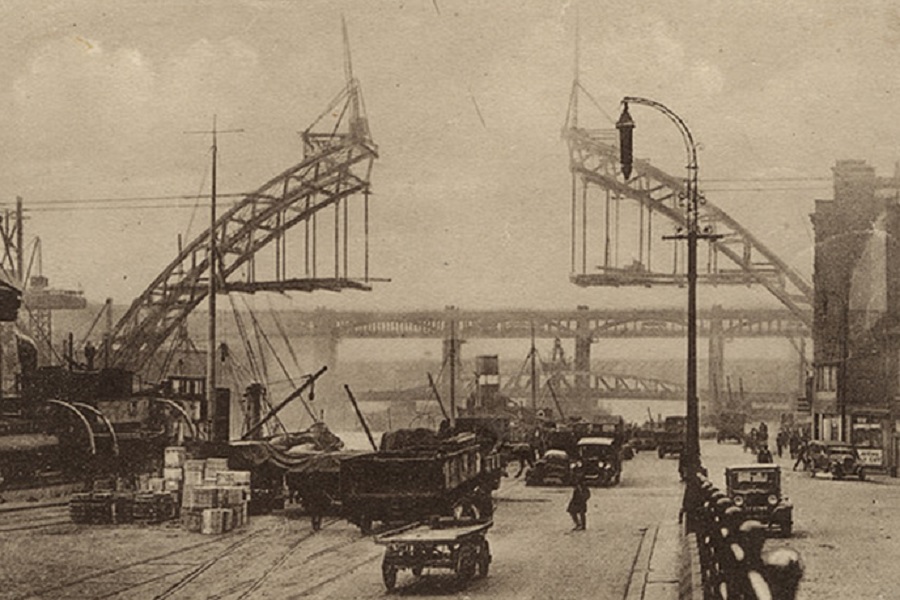 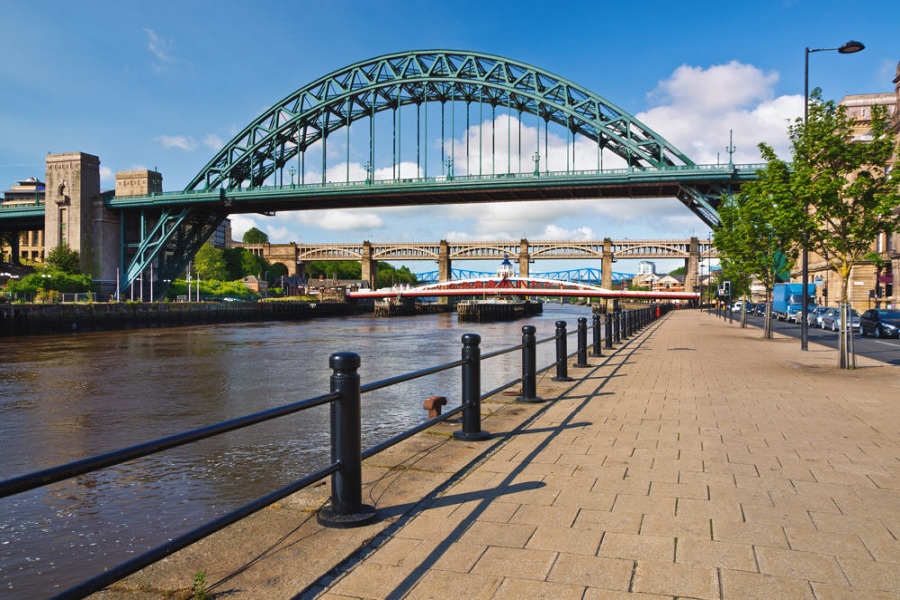 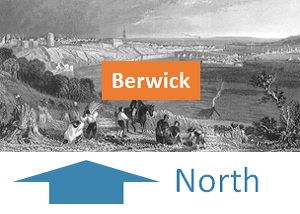 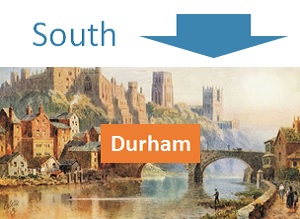 Hadrian’s Wall embodies one of the key reasons for the existence of the Roman Roads north through Britain which were the precursors to our Great North.....

The Romans built the first bridge over the Tyne in around AD 120 - at about the same time as Hadrian's Wall. It is sometimes referred to as Pons Aelius, after the.....

The meandering River Tees is crossed by the Great North Road close to Darlington. Today the A1 intersects the Tees to the west of the town. In the past it was.....