The modern A1 crosses the Great Ouse just north of Tempsford in Bedfordshire. Ermine Street crosses the river between Godmanchester and Huntingdon, now part of Cambidgshire. Between these two bridging points the Great Ouse meanders northwards, parallel to the Great North Road, passing Eaton Socon, St Neots and Brampton. A tributary, the River Ivel, runs close to the A1 from Letchworth to Tempsford.

About the River Great Ouse

The Great Ouse is Britain’s 4th longest river after the Severn, Thames and Trent. That’s true whether you believe the length is 162 miles as asserted by authorities such as Dorothy Summers, or the less convincing 143 miles suggested by Wikipedia. It has a catchment area of over 5000 sq miles. It rises west of Brackley, Northamptonshire, and flows past Buckingham, Milton Keynes, Bedford, Huntington, and Earith. Its course across the Fens is heavily canalised before it reaches the Wash at Kings Lynn.

There is another “Ouse” flowing through York and indeed there are several more – not surprising since the name is derived from the Celtic word for water. The Great Ouse is by far the longest.

As with the Welland and the Nene, the Great Ouse has been the target of efforts since medieval times to improve navigation, manage the flow and assist drainage across the low lying Fens. Construction of a series of “cuts”, drains, sluices and locks during the 17th century facilitated freight traffic as far as Bedford.

The Great Ouse does not flow through many large towns and despite agricultural intensification provides a natural network for wildlife. Parts are still lined with reedbeds, willow trees, alder carrs and wetland plants, while beneath the surface fish and invertebrates thrive.

There are a number of striking bridges over the Ouse and they are instructive with regard to the history of the Great North Road. One of the first things you will notice is that they are typically long and feature many low arches reflecting the level terrain and propensity to flood. Let’s start at St Ives and travel upstream.

The 15th century St Ives Bridge is noted for being one of only four remaining bridges in England to incorporate a chapel. Until it was restored in the 1930s the chapel had served as a toll house, private residence, inn and a doctor’s surgery. The bridge connects St Ives to Papworth which is 6 miles to the south. 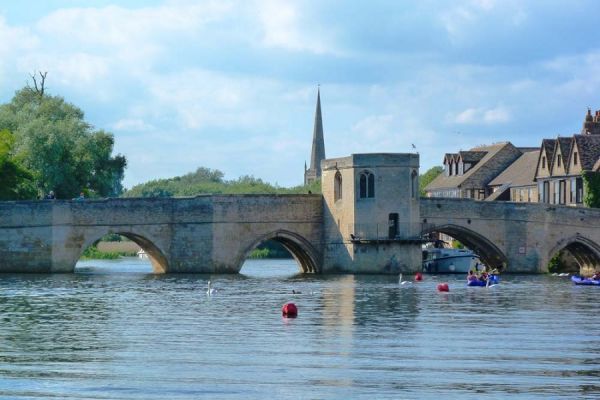 The fine medieval bridge at Huntingdon dates to about 1330, with repairs over the centuries. There are six stone arches with cutwaters and refuges on both sides. Above two of the arches there is a band of trefoil decoration. One of the central arches was temporarily replaced by a drawbridge during the Civil War.

Prior to the current bridge Edward the Elder built a wooden bridge in the early 10th century. Responsibility for its repair was a matter of dispute. In 1259 a court ruling ordered that the county should pay to keep it repaired in return for rendering the bridge toll-free. Nonetheless, the bridge remained in a poorly maintained state, and by the 14th century was declared to be in danger of collapse. The crossing point before the 10th century is believed to have been by a ford further to the west.

Approaching the old bridge on the Great North Road from the south was another bridge, over Cooks Backwater. The current red brick bridge has 8 arches and was built in about 1784 along with an elevated causeway to lift the road above the flood meadows. There is a plaque (now illegible) in a nearby wall which was a copy of the inscription which appeared on the previous bridge: 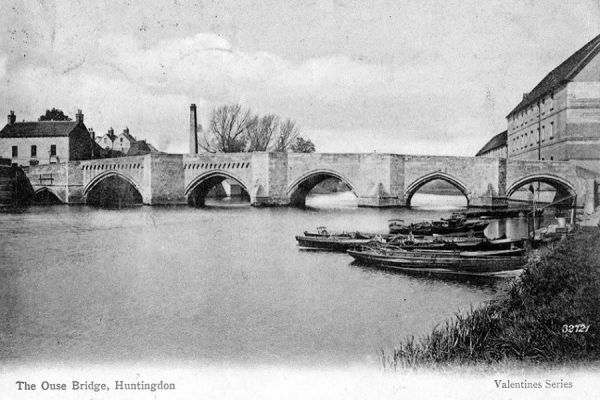 The bridge over the Great Ouse at St Neots connects the Great North Road to the west with the town to the east of the river, so would have been used by the many travellers who chose to visit one of its coaching inns. The current concrete structure built in 1963 replaced a stone bridge which in turn had replaced a wooden predecessor whose origins were in the late 12th century. Prior to that there was a ford.

There is an early and tragic reference to the wooden bridge from 1254. William de Ferrers, the Earl of Derby, fell from his litter whilst being carried across the bridge and subsequently died.

Maintenance of the wooden bridge was a persistent challenge. The scale of the task is made clear by a survey undertaken in 1588 by Commissioners for Queen Elizabeth. The bridge was described as 704 ft long, of which one section was 448 ft long and 10.5 ft wide with 43 arches ‘wholly built of timber’. The remainder of the bridge was 256 ft long and 7.5 ft wide; this section had 29 timber arches of several heights, and of varying lengths built upon a stone wall 6 ft high.

The outcome was the proposal for a replacement bridge with multiple arches on a stone foundation. Large quantities of limestone and wood were requisitioned and rights to a toll established. Built in the early 17th century, and with various repairs and modifications over the years, this is the stone bridge which survived until the 1960s. 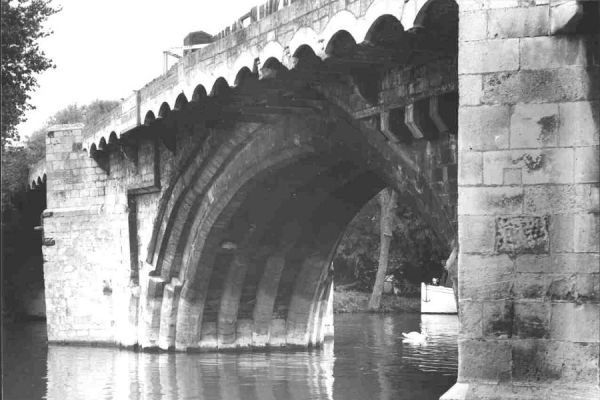 At Tempsford the Great North Road encountered a ford across the Great Ouse until into the 18th century. Pressures were mounting from both road users for whom the ford was problematic and boatmen who were unable to pass upstream on account of shallow water. The first resolution of the Biggleswade to Alconbury Hill Turnpike Trust established in 1725 was to construct a bridge. The 1736 timber bridge had six arches and a little later the approach road was raised on a causeway with further flood arches.

In 1814 the bridge was declared unsafe and plans drawn up for a replacement. The initial proposals were considered too expensive then the contractor undertaking a cheaper scheme ran into difficulties. The bridge was completed in 1820 by an alternative builder, Johnson. He followed the same plans though used Bramley Fall stone quarried near Leeds as sufficient stone from Sandy could not be obtained in time. The piers were supported on timber piles. Perhaps remarkably the bridge still carries the northbound A1 traffic. Spare a thought for the old bridge as you negotiate the sharp bends just before the Black Cat roundabout. 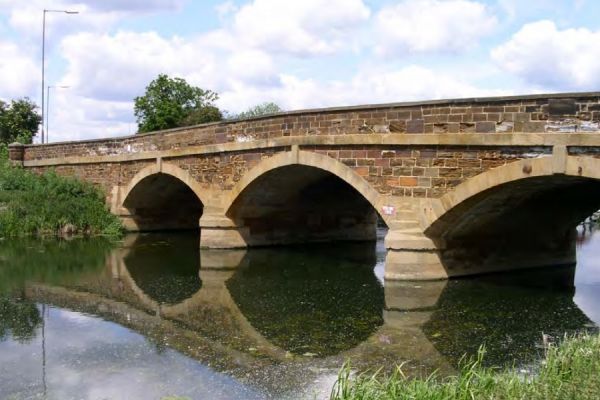 Finally, another nearby bridge over the Great Ouse. Three miles south east of Tempsford there was an alternative for north road travellers who did not want to risk the ford. The bridge at Barford dates from about 1440 and is known to have replaced an earlier structure.

In 1447 the inhabitants of Bedford complained that the new bridge at Barford was drawing traffic away to other market towns; as a result the town was impoverished and could not pay its rents due to the Crown.

In the 1530s John Leland described it as:

“a great stone bridge of eight stone arches near the uplandisch towne of Berford.”

These eight arches are 8 to 15 of the present bridge which includes a series of flood arches taking the total to 17. 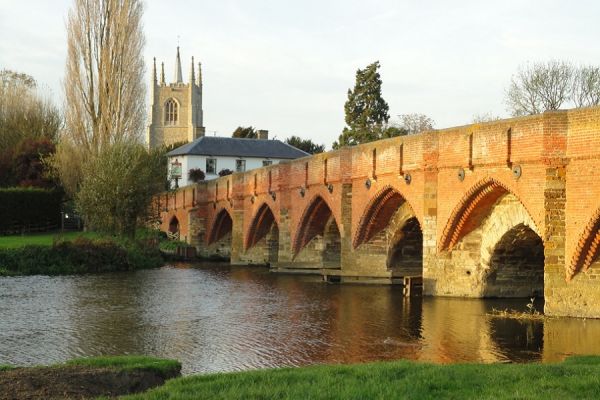 More Information about the Great Ouse