The River Trent at Newark marks where you cross from north to south, or vice versa, on the Great North Road. Well, that’s my view though some southeners would argue for the River Great Ouse near Huntingdon. Curiously the road signs are not terribly helpful in this regard; at A1 junctions you will find clear directions to “The North” and “The South” almost regardless of where you are starting from.

The Romans went to great lengths to avoid the Trent. They preferred instead to go by ferry across its estuary – the Humber.

About the River Trent

At 185 miles the Trent is the third longest river in England, and the second in terms of flow. It drains a large part of the Midlands including areas of the west such as Staffordshire. It has many significant tributaries including the Tame, Dove, and Derbyshire Derwent. It was navigable beyond Nottingham in ancient times, providing an important trading, and invasion, route. In 867 the Danish Vikings came up the Trent to Nottingham and Repton in their long ships. 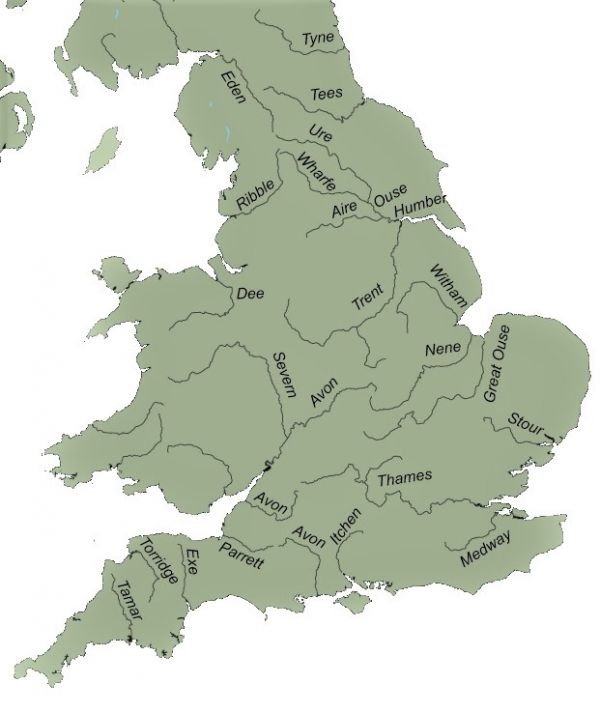 The Trent is now tidal for 50 miles up to Cromwell Lock just below Newark, and at spring tide a bore known as the eagre develops, with a wave front of about a metre. The Trent intersects many canals though only the Sheffield and South Yorkshire Navigation and the Foss Dyke to Lincoln are of much importance today in terms of commercial traffic.

As well as defining a north-south boundary, the final north flowing section from Newark to the Humber historically separated Lincolnshire from the rest of the English Midlands.

At Newark, Bishop Alexander of Lincoln was granted authority in 1135 to build both a castle and a bridge across the river close under its walls. This bridge and further timber re-builds were prone to floods. A far more robust stone bridge was completed in 1775; this bridge with seven arches is still in use today.

Newark is proud of its many Trent bridges and an interesting walking guide is available.

When Newark was by-passed in the 20th century the A1 shifted east. The elegant 1964 Winthorpe Bridge (Grade II Listed) provides a more impressive experience than most of the modern Great North Road river crossings. As you soar over the river there are striking views of the wide Trent valley including the lakes of the “A1 Pits”, South Muskham Fishery. Just to the north, the road runs close to the East Coast mainline railway providing the opportunity for a seldom won road v rail race.

The Trent enters the Humber Estuary at Trent Falls north of Scunthorpe. Here it joins the Ouse with its flow from a series of rivers draining the east of the Peak District and the Pennines. Like the Trent itself, the Humber has long been a natural barrier used to define territorial boundaries. It once separated the Anglo-Saxon kingdom of Northumbria from those of the south.

The ferry crossing of the Humber used by the Romans to connect Lincoln and York was from Wintringham on the south side to Brough on the north. It is suggested that at low tide the wide river might have been traversed on foot though in most conditions one would imagine a ferry was required. The Roman Town of Petuaria lies under Brough and is thought to have originated as the tribal centre of the Parisi, the people who lived in Roman East Yorkshire.

The first historical record of a ferry across the Humber was in a charter of 1315 providing for a crossing from “Kyngeston upon Hull …… unto the County of Lincoln”. The last regular ferry service was in June 1981 following completion of the Humber Bridge.