The meandering River Tees is crossed by the Great North Road close to Darlington. Today the A1 intersects the Tees to the west of the town. In the past it was crossed several miles to the south. Croft Bridge, dating from the 14th century linked Hurwoth Place in Durham to Croft-on-Tees in North Yorkshire. There are also 17th century records of a ford at Neesom (now Neasham).

About the River Tees

Upstream the Tees is a triumph of nature. It passes through beautiful Pennine country and features include the dramatic waterfalls at High Force as the waters tumble over the hard Great Whin Sill to the softer sandstone and limestone below.

Downstream the river is shaped by man. It passes through a desolate industrial landscape and features include the 1911 Transporter Bridge at Middlesboro.
The River Tees rises on the eastern slope of Cross Fell (2,401 feet) in the North Pennines, and flows eastwards for 85 miles to reach the North Sea between Hartlepool and Redcar.

Before the heavy industrialisation of the Tees, the flats at Seal Sands in the estuary were home to common seals. For around 100 years this species was absent from the estuary but have now returned. 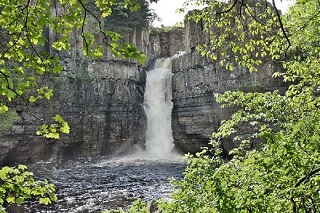