Ermine Street was a Roman road built within the first three decades following the invasion of AD 43. It started in London and was extended north to York as the conquest of Britain progressed. Much of the route is still followed by roads today – and where not, it is often visible in the form of tracks, crop marks or boundaries.

The southern section of Ermine Street aligns closely with the Old North Road, merging with the Great North Road near Alconbury, before heading slightly eastwards to Lincoln north of Stamford.

Beyond Lincoln the route to York was either via the Winteringham to Brough ferry across the Humber, or inland, crossing the Trent at Littleborough,  the Aire at Castleford and the Wharfe at Tadcaster.

Together, Ermine Street and Dere Street represent the primary Roman route from London to Hadrian’s Wall – and indeed further into Scotland.

The following interactive map provides information on the route and major Roman locations along Ermine Street. Click on a location to find a brief description and image. Please note that the route shown is “broad brush”.

If there are glaring errors or better information, please let me know and I will endeavour to improve this map – Rex Gibson

We don’t know what the Romans called this road. We don’t even know whether Romans thought of it as a singular defined road. We’re not sure to what extent there were pre-existing long-distance routes.

The name is of Saxon origin – Earningstraet. The Earningas tribe lived in an area between Royston and Huntingdon. Ermine Street is particularly applied to the London to Lincoln stretch, though for convenience it is often also used to describe the full route to York.

One of the few contemporary records of Roman roads is the Antonine Itinerary of the second century. The 5th British route which reached from Chelmsford to Carlisle includes the section of Ermine Street between Alconbury and York, following the inland option (it goes on to include the portion of Dere Street through the Vale of York).

The numbering system developed by Margary designates Ermine Street from London to York via Brough as route 2(a-e). The inland route from Lincoln to York is called route 28(a-c).

Maps and aerial photographs are an easy way to track Ermine Street’s route across the landscape. Many sections are remarkably straight for many miles, often pointing close to due north. Of course, river crossings and wet ground placed constraints on the Roman road builders; they kept away from the Fens and were forced significantly to the west when it came to finding a land route from Lincoln to York.

A good place to follow the route on maps is on the historic 6 inch to the mile Ordnance Survey maps. These are available to browse free online at the National Library of Scotland. Early mapmakers were keen to label Roman roads. 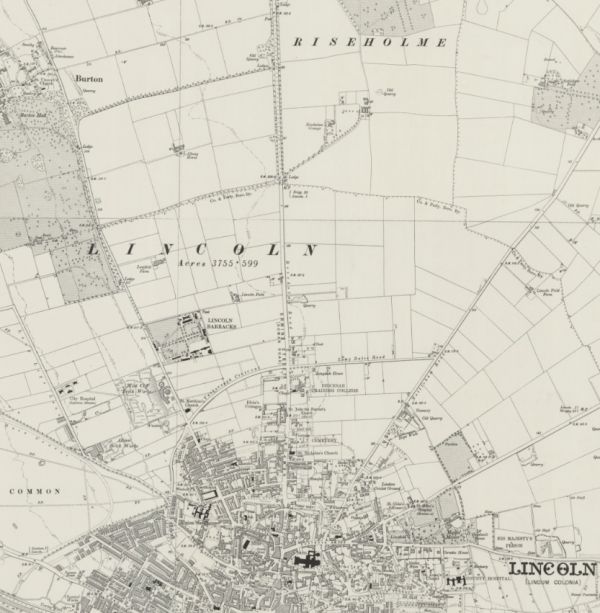 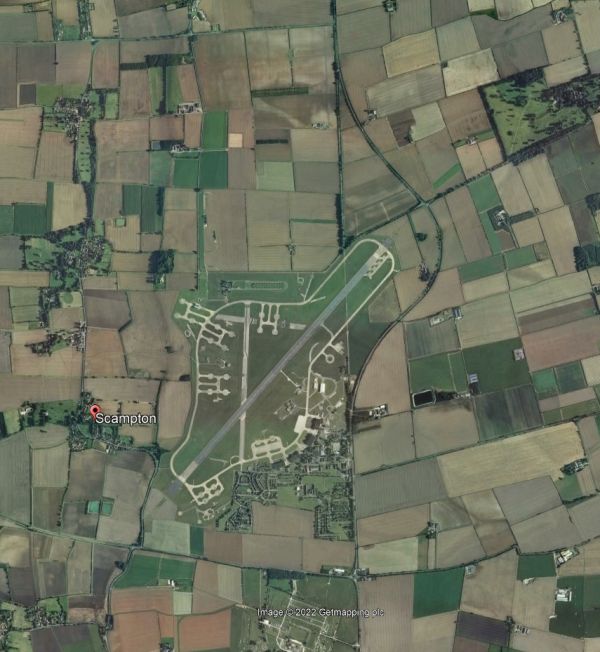 This Google Earth image from 2008 shows the A15 looping around RAF Scampton as it heads further north from Lincoln. The line of the earlier road (and Ermine Street) is clear. Field boundaries neatly align to the historic road.

A characteristic of Roman roads is a raised profile or agger to assist drainage. This often remains visible even when the route is not followed by modern roads. There are several long sections of Ermine Street where the agger is a notable feature in the landscape. As the road passes Grantham the road is referred to as “High Dike”. From Doncaster to Tadcaster the route is known as “Roman Ridge”. During the 19th century, parts of the road from Brough to Stamford Bridge became known as “Roman Riggs” (though the agger is no longer visible).

“From Wakefield we went to see the ancient town of Pontefract; but rode five or six miles out of our way over Barnsdale in order to see the great Roman causeway which runs across the moor from Doncaster to Castleford.” Daniel Defoe, 1724-27, A Tour thro’ the Whole Island of Britain

As a road name, Ermine Street is found widely between London and York: for instance, at Buntingford, Papworth, Ancaster, and Winteringham.

Then, of course, there are the opportunities when the full beauty of the Roman road has been exposed. There are many examples – some better recorded than others. The examples that follow are typical in that there is a consistency to the basic construction but width and building materials used vary considerably. There is often evidence of cart ruts, pot holes and repeated re-surfacing.

In 2003 Hertfordshire Archaeological Trust undertook an excavation on the Glaxo site at Ware, revealing a full cross-section. The first surface from the period AD 43-65 comprised shallow gravel foundation layers overlain by three substantial sandy silt layers containing flint inclusions. Re-surfacing and widening took place over the next hundred years. The second roadway was 9.6m wide and 0.3m deep, covering all previous road layers; it contained larger flint nodules than before for increased strength, though wheel ruts were seen reflecting the heavy volume of traffic. A number of additional layers were also noted, as was a thin cobbled layer on the east side which may have formed a separate walkway. The site is close to the River Lea at a point where a linear settlement grew up alongside the road.

A near complete section was seen in 2001/2 at the A1500 junction north of Lincoln. The sequence of layers from Roman foundations through to the tarmac of the A15 was clear. The earliest archaeological deposit was a layer of roughly laid limestones, bonded with coarse reddish-brown sand laid directly over limestone bedrock suggesting that any soil was removed to create a stable surface. The excavation revealed a succession of road surfaces, each made from limestone chippings bonded with limestone sand, both of local origin. The agger of the Roman road was 6.5m wide and 0.4m deep. Over the agger, some of the road surfaces showed evidence of wear and later repair. Three lower surfaces were sealed by a layer which contained a large sherd of a mid-2nd century Spanish amphora. There appeared to be further Roman surfaces above. 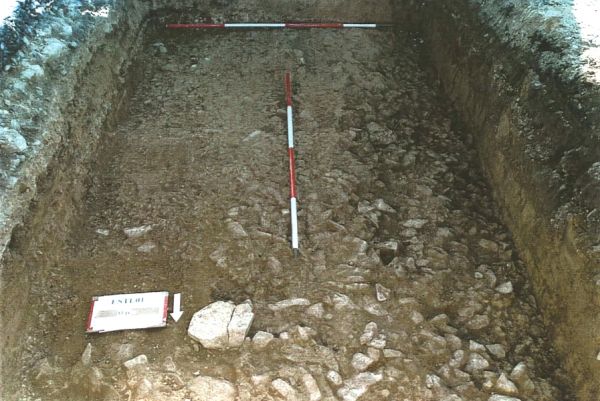 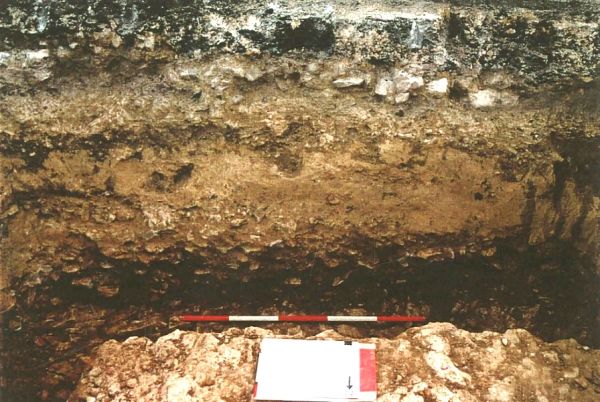 The report of this excavation makes comparison with other Lincolnshire examples at Scampton, Coleby Heath, Navenby and Stamford. The size of the road varies considerably: at Scampton it was 12.3m wide and 0.75m thick; at Coleby Heath it was either 8.7 or 15m wide; at Navenby only 60mm thick; at Stamford it was 6.6m wide and 0.75m thick. It is quite conceivable that in the vicinity of a major settlement the road may have widened to accommodate an increase in local traffic and pedestrian movement. Materials were generally local but varied considerably with, for instance at Stamford, use of clay with inset limestone rubble. 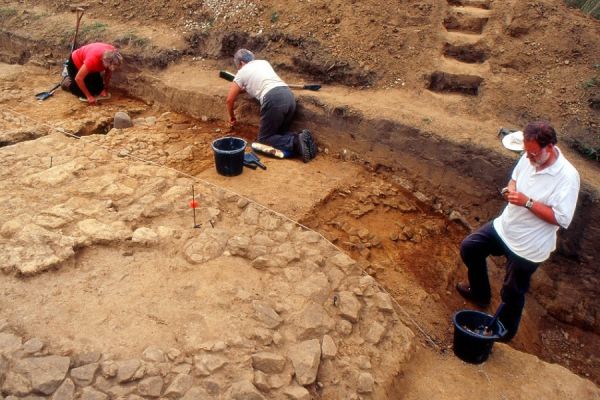 Excavation by Pontefract Archaeological Society. at Thorpe Audlin between Doncaster and Castleford revealed not only the road’s construction but also a footprint and hoofprints. (Photo credit – Eric Houlder)

South of Stamford Bridge, the road was excavated on Barmby Moor Common in 1892 by Maule Cole and Bardwell where a foot below the surface:

“a layer of mortar was met with, fifteen feet wide, nearly a foot thick, and raised in the centre.” 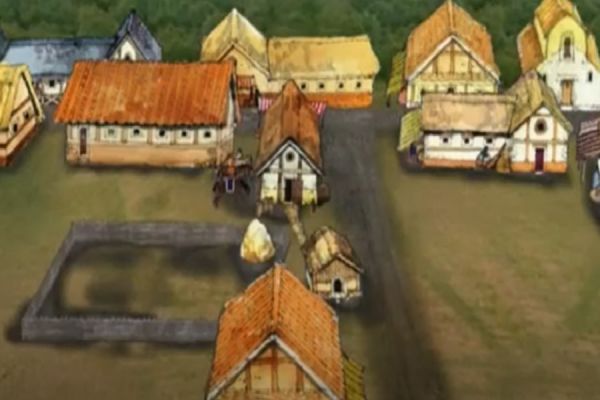 An Ermine Street Pub at Cheshunt as imagined by Time Team. You can watch the programme (season 9 episode 6) on All Four and on You Tube:

This 2.2m tall milestone was unearthed in 1879 at Bailgate, close to Lincoln’s forum and interpreted by Arthur Smith: 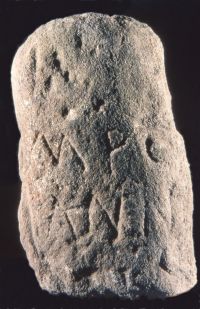 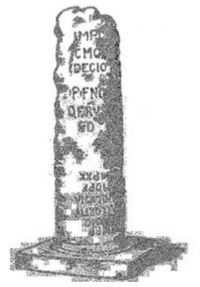 One of three milestones found near the Roman road in Castleford. One found in 1880 near the south end of Beancroft Road was cylindrical in shape and had two inscriptions on it: the first was to the Emperor Trajan Decius (AD 250-251); the stone was then turned upside down and a new inscription was added to Gallus and Volusian (AD 251-253); it gave the distance to York as 22 miles. 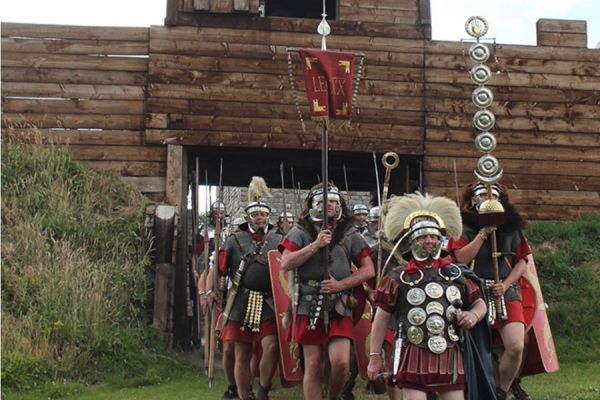 The Ermine Street Guard brings the Roman Army to life with their authentic displays of Roman armour, weapons, training, camping and warfare.

The interactive Google map includes brief detail on each of the locations noted along Ermine Street but these can be difficult to access on some devices. The content is replicated here.

London (Londinium)
The Romans built the city where London now stands, bridging the Thames and creating Londinium. From around AD 50 to 410, this was the largest city in Britannia and a vital international port. The Roman forum was located under Leadenhall Market, with Gracechurch Street replicating the Roman route south to the wooden bridge, and north towards Lincoln via Bishopsgate.

Braughing
An important late Iron Age settlement at the limit of navigation along the Lea, Braughing became a Romano-british town covering 36 heactares on a low chalk ridge between the River Rib and Ermine Street.

Godmanchester (Durovigutum)
An early fort was short-lived and the first settlement was burnt down in the Boudiccan Revolt. However, the town recovered and expanded to include the second largest mansio complex in Britain.

Peterborough (Durobrivae)
A short-lived fort by the Nene bridge gave way to a significant town with extensive pottery and iron production. It was also a centre for agricultural administration.

Great Casterton
Encircled on three sides by the River Gwash, the Romano-British settlement at Great Casterton on the north bank of the river close to a Claudian auxiliary fort.

Ancaster
A small, yet walled, Roman town on Ermine Street preceded by a fort and an extensive Iron Age settlement.

Lincoln (Lindum)
Lincoln was first garrisoned by the Ninth Legion Hispana (which moved on to York c AD 71), then by the Second Legion Adiutrix, which then went on to Chester. The fortress became a “colonia” settlement for retired soldiers, and the town grew to include forum, baths, temples, shops and walls.

Winteringham (Ad Abum)
This settlement lies on the south bank of the Abus Fluvius (River Humber) directly south of the large settlement on the opposite bank at Petuaria (Brough-on-Humber). The river is very wide at this point so the crossing was probably made via ferryboat.

Brough (Petuaria)
An early fort and port that became a civitas, capital of the territory of the Parisi.

Stamford Bridge (Derventio)
At a crossing point of the Derwent there was a minor Roman town. Recent research suggests the road from Brough came via Stamford Bridge rather than the more direct route previously assumed.

York (Eboracum)
The Romans built their impressive fortress between the Foss and the Ouse where the minster now stands. It was a major military base with strategically important transport links.

Littleborough (Segelocum)
The Roman town of Segelocum was located at the fording point of the River Trent by the road between Danum (Doncaster) and Lindum (Lincoln). It is referenced in both the fifth and eighth Antonine Itineraries.

Bawtry
The fortlet ½-mile east of Bawtry guards the crossing over the Itchen of the Lincoln-York road. The road passes 30m outside its north-eastern defences.

Doncaster (Danum)
Danum was the site of two Roman forts – one Flavian one and the other a smaller Trajanic/Hadrianic fort. It was of particular military importance being on the border between the powerful and truculent Brigante tribe north of the River Don and the more amenable Coritani to the south.

Castleford (Lagentium)
The Romans fort was positioned to control the crossing over the River Aire. The fort was in an area now bounded by Church Street, Carlton Street and Bradley Street. A civilian settlement grew up immediately to the south-west in the area of modern Welbeck Street.

Tadcaster (Calcaria)
The Roman settlement lay at the crossing of the River Wharfe by the Roman road between York and Doncaster. Just to the north, at Newton Kyme, two Roman forts, an associated vicus, and two Roman camps have been identified; this may point to an earlier crossing point of the Wharfe.