Perhaps the most famous return trip along the Great North Road was that of Harold in 1066.

Faced with both Scandinavian and French challenges to his newly assumed title Harold darted north then south immediately before his Hastings demise.

This relatively well documented journey provides real insight into people’s ability and propensity to travel long distances at this time. Though long before accurate maps were available, people’s knowledge of geography was well developed. The invaders were travelling internationally – and, in the case of Tostig, navigating the entire east coast of England. And for Harold, the return march to York was impressive – though probably not as unusual as we who rarely walk 1 mile to the local shops are inclined to think.

Harold Godwineson, Earl of Wessex, had been positioned to succeed Edward the Confessor who died on 5th January. Harold was crowned at Westminster Abbey by Archbishop Stigand of Canterbury and Archbishop Ealdred of York. Immediately, he faced threats to his sovereignty from others who claimed the crown.

Haileys comet appeared on 20th March as a harbinger of the end of the Anglo Saxon era.

Harold’s brother Tostig had recently been ousted from his Earldom of Northumbria. After failed invasions on the Isle of Wight and at Sandwich he gathered support in Scotland and prepared an attack by sea from the north-east. He enlisted the support of Harald Hardrada, King of Norway. Their armada of over 300 ships sailed up the Ouse and attacked York from the south.

William of Normandy meanwhile prepared his invasion across the Channel.

News of Hardrada & Tostig’s attack on York and victory at Fulford on 20th September prompted William to head north. He left London and arrived in York on 25th September.

Many question how an army of many thousands of men and horses could have travelled the 185 miles so quickly. Probably, news of earlier attacks on Scarborough and other north-east ports had already sparked preparations. No doubt, some of his army joined the expedition on route. However, it is a testament to the quality of the road (and the stamina of men and horses) that they could travel up to 50 miles per day.

Exactly what route they took is open to debate; it could have been more than 185 miles. With no bridge over the Trent at Newark the favoured road to the north at this time was via Leicester and Nottingham. When a re-enactment march was organised in 2016 by Historic England the route used was across the Fens and through Sleaford and Lincoln.

Hardrada and Tostig had moved to Stamford Bridge, a crossing point over the River Derwent east of York, ready to arrange the division of their new territories in the north-east amongst their supporters. Harold arrived unexpectedly, fought a prolonged battle and won a dramatic victory (the scene above was depicted in 1870 by Peter Nicolai Arbo). He retired to York but, shortly after, news arrived that the Normans had landed at Pevensey Bay in Kent on the 28th September.

It is believed that news of the Norman invasion reached London on 30th September and York on 2nd October.

Harold rushed south, his army following a day or two behind. He stayed at Waltham Abbey (his family estate and later burial place) before arriving in London on 6th October. He clearly travelled the length of the old great north road or Ermine Street. Six days later he left for Hastings. Unable to repeat the success of his northern campaign, the rest is history! 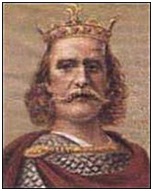 Even in death his travels were not over since he was finally buried at Waltham Abbey – not far from the the route of the old north road.