King of Cheeses. Stilton cheese is recognised across the world as a unique and special variety. Its initial commercial success was the direct result of its popularity with coach passengers travelling the Great North Road in the 18th century. It gave its name to one of the overnight stops on the road.

NO!  There are competing theories about the role of the village of Stilton in the creation of the cheese but no one argues that it is the village near Peterborough which gave Stilton cheese its name.

Traditionally paired with sherry and port, an admiring description of the cheese comes from one of its rivals, Danish blue cheese specialist, Castello (Arla Foods):

“Stilton has a beautiful interior, streaked like marble, and the texture is crumbly and almost soft – relatively delicate compared to its stout and bold flavours. Intense and rich, the taste is complex, opening with creamy and nutty specks, followed by a salty finish that sticks to your palate.”

Trevor Hickman in his History of Stilton Cheese:

“Undoubtedly the blue-veined cheese we now recognise as Stilton was developed because of increased demand. Most probably this arose as a result of the development of road links throughout the country following the road-reforming decrees of the reign of Charles II and the toll-road Acts of the 18th century. The most important such highway was the Great North Road, on which Stilton had been a staging post for centuries, supporting many generations of travellers as a stop-over point on their journeys.”

Long before it received Protected Designation of Origin (PDO) status under European law Stilton had been given recognition as a unique product within the UK. In 1936 the Stilton Cheesemakers’ Association (SCMA) was formed to lobby for regulation to protect the quality and origin of the cheese. In 1966 Stilton became the only British cheese to be granted a certification trade mark. Amongst the PDO criteria for Stilton cheese is that it must be made in the counties of Leicestershire, Nottinghamshire or Derbyshire.

Stilton has become an international commercial success. More than a million full stilton cheeses are produced each year. Its 6 producers were responsible for most of the country’s £18m export of blue cheese in 2019. Stilton is supplied to 40 countries around the world including France, Japan and Nepal. Stilton also claims a significant share of the £95m domestic blue cheese sector.

The origins of Stilton as a “branded” product go back to the 1730s and 1740s. At this time the Bell Inn at Stilton near Peterborough was developing a reputation for its cheese and as travel along the Great North Road increased so did demand. There are two key individuals associated with its early history.

Cooper Thornhill, born about 1705, was an entrepreneur trading as a successful corn merchant across East Anglia. He acquired the Bell at Stilton in 1730 and saw opportunities to sell the local cheeses to the growing population of London and other towns. In the 1740s he established a commercial arrangement with a renowned cheese maker from Wymondham, 30 miles up the Great North Road in Leicestershire. Thornhill’s control of the Stilton trade was consolidated in 1743 when he purchased the Angel in Stilton for £850. At its peak the Angel Inn stabled 300 horses and had its own resident farriers and blacksmiths. 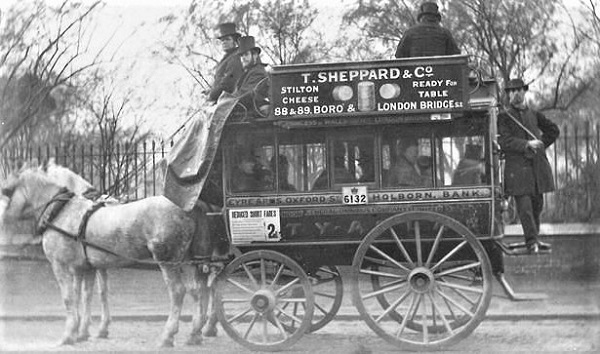 An advertisement for Stilton cheese features on the first omnibus to drive over Holborn Viaduct in November 1869.

Frances Pawlett, born in 1720, came to live in Wymondham where she and her husband farmed 169 acres. With a reputation as a fine dairywoman it seems that it was Frances who standardised the shape and weight of the blue-veined cheese which bears the Stilton name. She may well have developed the procedure of hand crumbling and packing the curd (to accelerate mould formation) and piercing of the maturing cheese with large needles (to speed mould growth). 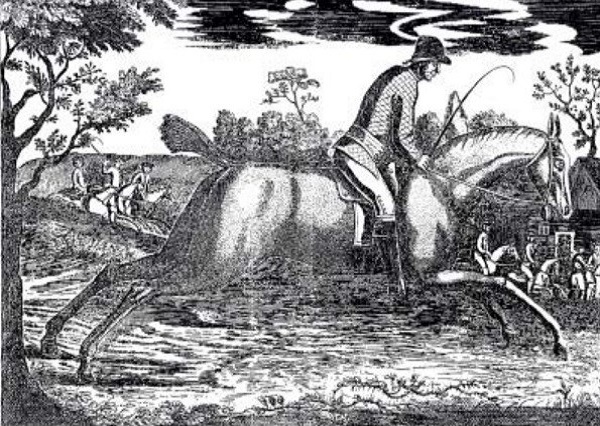 Thornhill was a sportsman and clearly knew the Great North Road well. In order to win a 500 guinea bet, in 1743 he rode 213 miles from Stilton to the King’s Arms, Shoreditch and back in a time of 12 hours 15 minutes, using 19 horses.

Barred from actually producing the cheese in Stilton, since it is outside the designated area, villagers contend that this is unfair and fails to respect historical facts since there is no doubt that cheese was being produced locally well before the association with Wymondham. The first reference to Stilton cheese is by William Stukeley in 1722; and a popular book of 1728 refers to full cheeses being purchased from the Master of the Blue Bell Inn at Stilton, when in season.

As early as 1724 Daniel Defoe noted (tongue in cheek I hope):

“We pass’d Stilton, a town famous for cheese, which is call’d our English Parmesan, and is brought to table with the mites or maggots round it, so thick, that they bring a spoon with them for you to eat the mites with, as you do the cheese.”

In a book of 1732 Richard Bradley includes a detailed recipe and notes:

“As to the Fashion of this Cheese, it is about eight inches high, and about seven Inches the Diameter over the Top. It is so soft, that when we cut it at a year old, or about the Christmas next after the making, one may spread it upon Bread like Butter.”

In 1793 the Leicestershire historian John Gough Nichols published his History of Leicestershire in which he states that Mrs Elizabeth Orton started production of Stilton cheese in 1730 at Little Dalby. This Mrs Orton was previously Miss Elizabeth Scarborough who worked at Quenby Hall for the Ashbys producing a soft cheese using a recipe provided to them by a Lady Beaumont of Coleorton Hall. It has also been claimed that in 1759 Shuckburgh Ashby set up a commercial arrangement to produce Stilton cheese for sale by the then new owner of the Bell Inn at Stilton. 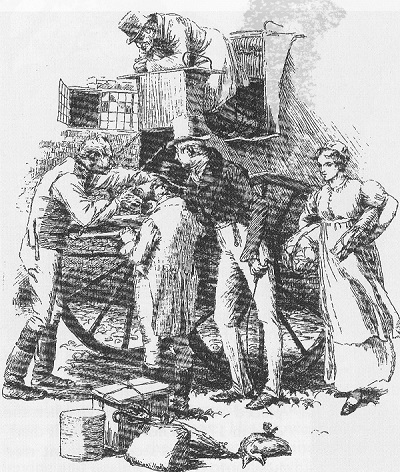 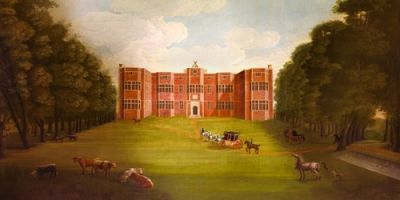 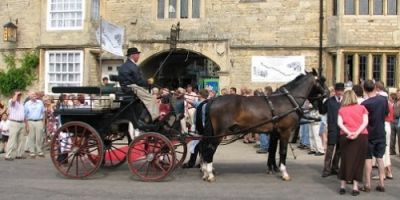 An ill-fated enterprise to re-establish the production of Stilton at Quenby Hall included delivery of cheeses to the Bell by coach.

From Farmhouse to Commercial Creamery

The arrival of the railways in the mid 19th century may have undermined the trade via Stilton but it of course further stimulated the thriving East Midlands business. There was hardly a village in Leicestershire, Rutland and Nottinghamshire which did not have a farm making Stilton. Production started to shift from farmhouse to village dairies with increased scale and automation. The first cheese factory was opened by Thomas Nuttall in 1875 at Beeby near Leicester. 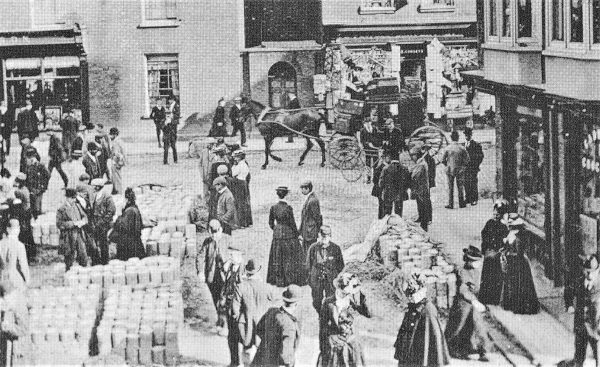 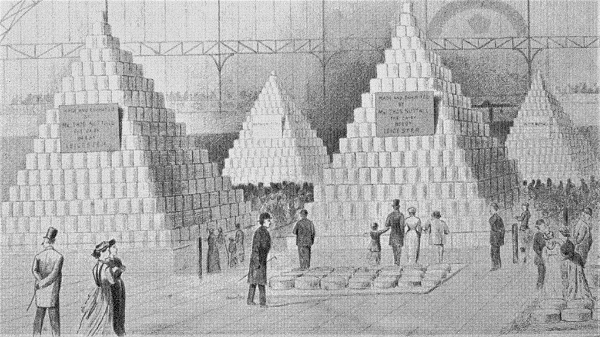 Twelve pioneering farmers met in 1911 in the village of Long Clawson, near Melton Mowbray, Leicestershire and formed a company to make Stilton cheese. This was the start of one of several cooperatives set up to improve the quality of Stilton by making the cheese in better conditions, and in larger quantities than were possible on the farm. The last commercially run farmhouse dairy at Somerby closed in 1935.

There are currently 6 accredited Stilton producers: Colston Bassett, Tuxford and Tebbutt, Websters, Long Clawson, Cropwell Bishop, and Hartington Creamery. They range from small privately owned companies to divisions of major international dairy groups. They all proudly maintain the recipes and traditions built up by master cheesemakers over 300 years.

The following glimpse of the process is provided by the Stilton Cheesemakers Association. 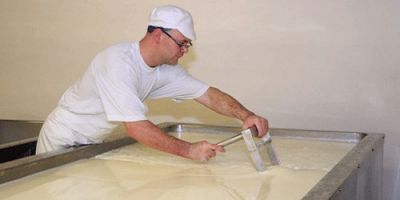 Curd Forming. Fresh, local milk is poured into an open vat along with starter cultures, rennet and penicillium roqueforti. 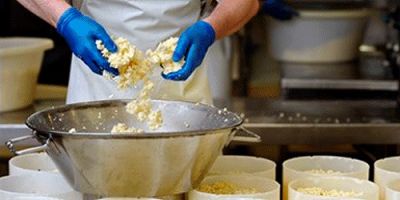 Milling. The milling process breaks the curds down into small pieces which form the basis of the cheese.

Hoop Filling. The curds are divided and transferred into hoops or moulds, then left to drain for several days. The hoops are turned regularly to allow an even distribution of moisture. 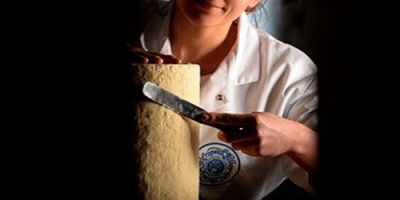 Rubbing Up. The cheesemaker uses a knife to smooth of the edges of the roundel, preventing blue mould growth at this point. Five days later the hoops are removed and each roundel is sealed. 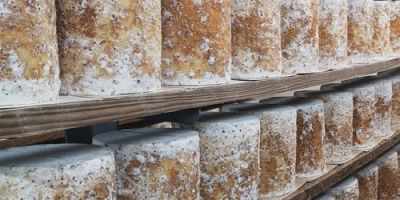 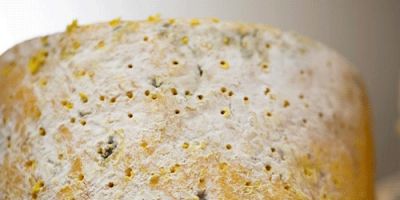 Piercing. The roundels are pierced with stainless steel needles to enable the blue mould to develop and give the cheese its characteristic appearance. As the blue veins develop they enhance the flavour of the cheese. Penicillium roqueforti (and the enzymes it releases) break down the fat and protein in the cheese to give it the distinctive sharp, strong and piquant flavours and aroma. 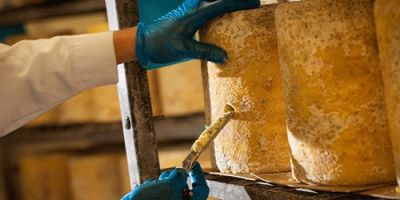 Grading. A cheese iron is used to remove a core from each roundel so its smell, taste and texture can be assessed before release for sale.