Alongside the original route of the Great North Road just south of Stevenage town centre there are 6 rounded barrows.

Betweene Stevenhaugh and Knebworth (…) I saw certaine round hils cast up and raised by mans hands, such as the old Romans were wont to reare for souldiers slaine in the wars (…) Unlesse some man would rather say they had a reference to the bounds.

Eighteenth century reports state that they were regularly pointed out by coachmen. Harper recounts the following tale:

To coachmen, who were adepts in the art of what the slangy call ” spoofing,” and were always ready—in earlier slang phrase—to ” take a rise out of ” strangers, the Six Hills afforded an excellent opportunity of practising a diluted form of wit, and often brought them a glass of brandy or rum-and-milk at the next pull-up, in payment of the bets they would make with the most innocent-looking passenger, that he could not tell which two of the hills were furthest apart. They are, as nearly as possible, equi-distant; but strangers would select one couple or another, according to their fancy; whereupon the coachman would triumphantly point out that the first and the last were, as a matter of fact, the most widely divided.

There was damage to the Six Hills in about 1820 caused by widening of the Great North Road. Over the years, the Hills have all lost over 1metre in height.

Despite their prominent position there is little solid information concerning their origins. It is believed that they are Roman burial mounds dating from about 100AD. They form the largest surviving group in England of this period. They would have contained the remains (possibly cremated) of prominent local people along with their burial goods.

The hills have all been dug in the past but documentation is scant. In 1741 Dr Andrew Ducarel  found scraps of wood and iron, but nothing that he considered significant. Unfortunately, none of the finds were kept, and no written reports remain. The wood and iron were probably traces of the original burials. 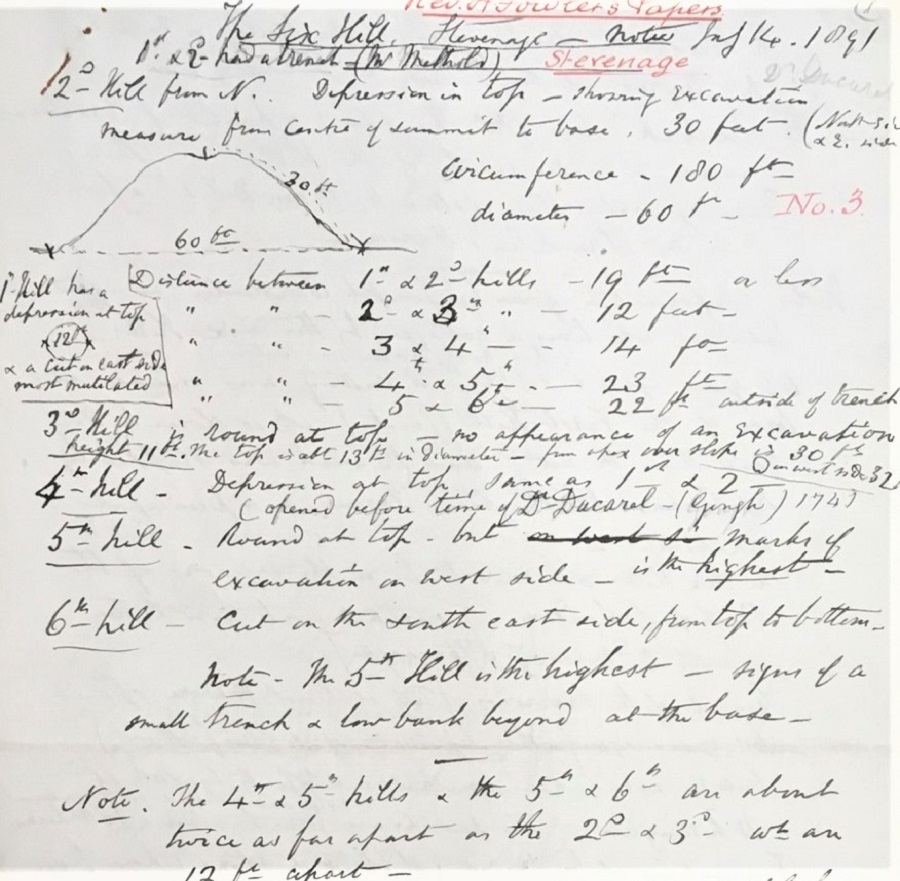 In 1724 William Stukeley captured the “6 Barrows” in an engraving – along with wagon and horses heading south on the Great North Road.