Hadrian and The Great North Road

Emperor Hadrian visited Britain in the summer of AD 122 as part of his first major tour of the provinces. His primary concern was to neutralise threats to the authority of Rome. He was particularly concerned with the northern border with Scotland but his normal practice whilst on tour was to visit a variety of regions and cities, inspecting all the garrisons and forts.

We do not know his precise itinerary but it is highly likely that he would have travelled the major part of our north road.

About Emperor Hadrian in Britain

Hadrian succeeded Trajan in AD 117, inheriting an empire which had grown rapidly through conquests stretching from current day Iraq to Scotland.

His priorities centred on consolidation, putting limits on territorial ambition and rebuilding civil and military life. He was interested in construction and engineering – and would inspect and discuss details such as weapons, engines, trenches, ramparts and palisades. Hadrian was to spend more than half his reign outside Italy travelling his provinces extensively.

He may have spent the winter of AD 121-2 in northern Europe, perhaps staying with the governor of Lower Germany, Nepos, in Cologne. Nepos is believed to have accompanied Hadrian next spring to become Britain’s new governor, in which role he appears on a diploma dated 17 July. The emperor’s visit to Britain was commemorated on later coins.

By the start of the second century there was already an extensive building programme. Construction at Caerleon was already underway by AD 100, Chester around AD 102, and York by about AD 107. Campaigns to conquer and take land had been replaced by education of the British in Roman ways. The army’s forts had become quarters. The military presence was assuming a less aggressive role. This said, there is also evidence of a period of unrest and revolt from AD 118-122 under Quintus Pompeius Falco – probably along the northern border though this is surmise.

Hadrian visited the northern border where work on a coast to coast wall had most likely already started. Evidence of Hadrian’s visit is scant though a luxurious building at Vindolanda has been associated with it. One of the writing-tablets addresses ‘your majesty’, quite possibly meaning Hadrian.

There are several historical references that suggest the structure became known as Hadrian’s Wall, even during his lifetime.

Recent research by Erik Graafstal suggests that whilst the wall was already underway, Hadrian was personally involved in significant decisions regarding its construction during his visit. In particular, there was a change of plan providing for forts to be placed on the Wall at regular intervals. Some like Chesters were placed to straddle the Wall, others like Housesteads had their north walls coincide with it. This decision made some of the earlier work redundant and added considerable cost. There was an additional decision to add a second barrier, the Vallum, which provided for a flat-bottomed and steep-sided ditch, 10 ft deep and 20 ft wide at the top.

By the end of AD 122 Hadrian had concluded his visit to Britain, moving on to southern Gaul then Spain. 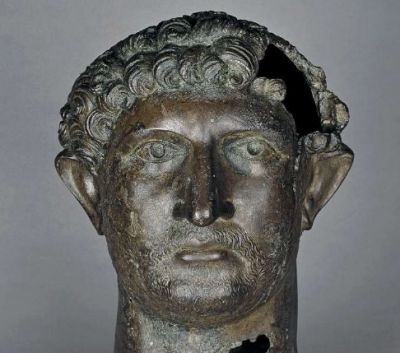 Bronze head of Hadrian found in the River Thames in London – British Museum. 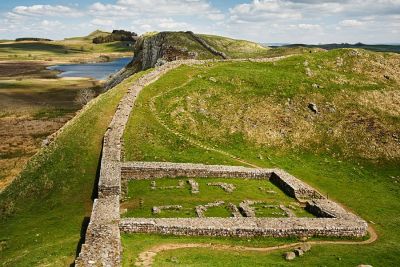 Erik Graafstal, What Happened in the Summer of AD 122? Britannia 2018