The Stamford Canal was the longest canal with locks in the country when it was opened, preceding the ‘canal age’ by around 100 years.

By the 16th century it was no longer possible for river traffic to reach Stamford. This was at least in part due to the development of a series of mills along the River Welland. The prosperity of the town was being held back.

As early as 1571 a “Navigation Act” was signed by Queen Elizabeth I granting permission to create a new “cut” to bypass the watermills. Nothing moved forward initially but the powers granted to Stamford Corporation were renewed in the 1620s under James I.

Construction of the six and a half mile canal between Stamford and Market Deeping was begun by Daniel Wigmore in 1664 at a cost of £5000. Its completion date is not exactly known but traffic was reported to pass up and down in 1673. Wigmore was given the lease of the tolls for the next 80 years, for which he paid a rent of one shilling.

The ten locks on the canal itself were turf sided with stone abutments. The other two locks on the River Welland in Deeping St James had stone chambers to withstand the faster flow of the river when in flood. The canal joined the Welland near Stamford at Hudd’s Mill.

The canal enabled goods to reach Stamford from the North Sea, 34 miles away, by way of Spalding and Crowland. Coal was the primary cargo – though malt, agricultural produce, groceries and timber were also carried. Boats used on the canal were small lighters 35 feet long by around 7 feet wide, capable of carrying from seven to fourteen tons, and normally worked in trains of four vessels.

Mid 18th-century warehouses are still in evidence near the Town Bridge in Stamford (see photo above). The 1824 gas works (now the Albert Road car park) took deliveries of coal directly from canal barges. The canal facilitated development on the south bank of the Welland with a number of maltings and breweries.

The Leicester to Peterborough railway line opened in 1848 and this quickly made the canal obsolete. The last vessel left Stamford in 1863.

A community project undertaken by the West Deeping Heritage Group has provided a wealth of detailed information about the Stamford Canal. 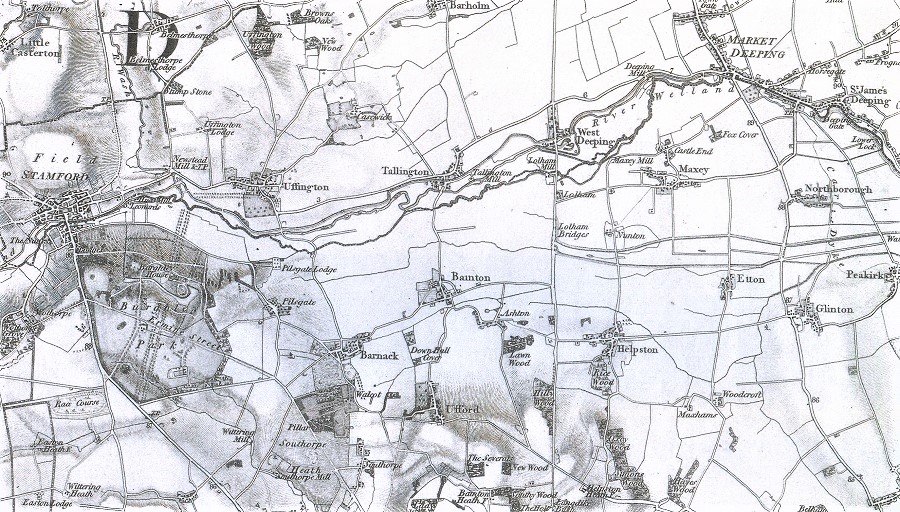