George Brown was test rider for Vincent in their heyday and in 1961 took the Standing Start Kilometre World Record for up to 1000cc machines with an average speed of 108.7 mph.

His record breaking bikes, Nero and Super Nero, took pride of place in his own motorbike shop on the Bowling Green in Stevenage High Street throughout the 1960s. Young boys peering through the window developed a lifelong lust for speed. 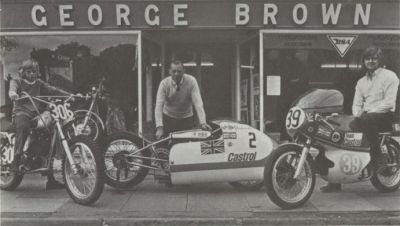 George Brown was born in 1912 in Nottingham and started motor cycling on a Raleigh. Meeting Philip Vincent of the Vincent HRD Company in Stevenage led to a job in their experimental shop in 1934. Naturally, he spent as much time as possible testing the products at the highest possible speeds.

Whilst the local police were tolerant, George did on one occasion end up in court. When asked what speed the defendant had been doing, the police officer declared that his stop watch made it 110 mph. “Impossible!” said the magistrate, and forthwith dismissed the charge.

He rapidly became a road racing star at places like Cadwell Park, riding a 500cc Series A Comet Special. After the war he returned to Vincent and road racing. In 1948, he raced for the first time in the Isle of Man, at the Clubmans’ TT. He was well in the lead after three laps in the up to 1000cc Senior, but then ran out of petrol. He had the consolation of taking fastest lap at 82.6 mph on his virtually standard Series B.

The Vincent company started to move away from motor cycles in the early fifties to concentrate on industrial engines, and in 1952 George left to open his own motor cycle shop. George and his brother Cliff (who had also worked at Vincent for years) were very keen on conventional suspension, front and rear, whereas the factory insisted upon keeping to their own rather special designs. The brothers decided to make a racing bike of their own. They paid £5 for a burnt-out Rapide and this formed the basis of Nero.

In 1962 a supercharged version, Super Nero, was developed and became an icon of 1960s motorcycling. The Vincent V-twin engine produced an awesome 125bhp. In 1967 Brown blasted his streamlined creation to a world standing-start mile record at 128.6 mph. In 1970 he added a third wheel and increased the  1300cc sidecar flying-start mile figure to 128.2 mph.

George long hoped to set a 200 mph record for a flying start kilometre run. He had already recorded a finishing speed at Elvington of 236mph. He was held back for several years until FIM, the international organisation regulating official speeds, agreed in 1968 to relax their age limit of 55. George celebrated by setting a new national and world record for the flying kilometre with a two way mean average of 182mph. 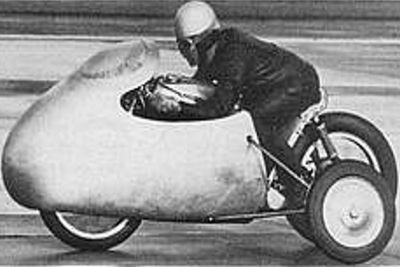