Many who travelled the Great North Road during the 20th Century will recall the latest De Havilland prototypes being flown above and around Hatfield – and also of course, the Comet hotel at the northern end of the Barnet bypass. The model plane in front of this iconic 1936 building was the red Comet Racer which set the London to Melbourne record in 1934 at just under 71 hours. The carved stone pylon illustrates 18 methods of flight. 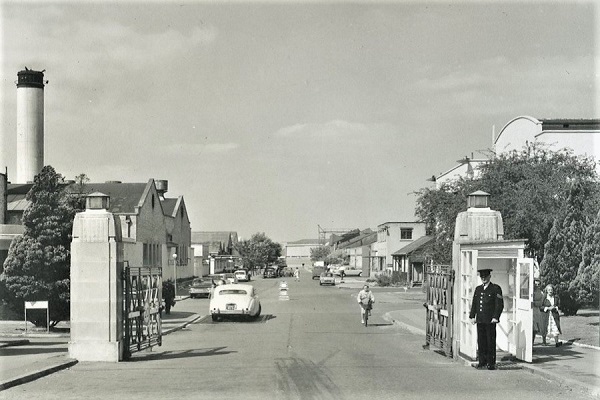 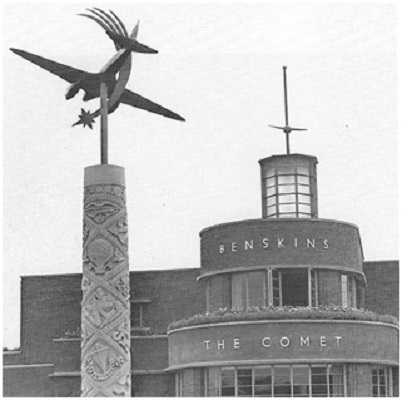 Hatfield was a leading centre for aircraft design and manufacture from 1933 to 1993. During the Second World War the Mosquito (aerial photo above) played a central role, while in the 1950s the Comet was the first commercial jet to go into service.

The success of Hatfield as a centre for aircraft design and manufacture was intimately linked to the life of Sir Geoffrey de Havilland. He built, flew and crashed his first plane in 1909 – just 6 years after the Wright brothers. Undeterred he pursued a range of aero engineering jobs which placed him at the centre of this emerging technology. During the 1920s his company was based at Edgware and was responsible for the “Moth” series of planes. The de Havilland Company moved up the A1 in 1933 establishing more modern buildings and a larger airfield immediately adjacent to the Barnet bypass on the Great North Road.

During the 1930s the airfield became well known for hosting the finals of the The King’s Cup Race, an annual cross-country air race established by King George V. The prestigious race was held at Hatfield Aerodrome from 1933 to 1939; the first race was won by Geoffrey de Havilland in a Leopard Moth with an average speed of 139.5 mph.

The origins of the Mosquito lay in the all wood de Havilland racing planes appearing in the mid-1930s under the designation DH88 “Comet”. The extensive use of a plywood and balsa was at odds with metal-skinned airframes beginning to take hold in military fleets. There was initial resistance from the RAF but its speed, agility and low manning requirements won out. Production began in 1941, with the plane entering widespread service in 1942. Over 7,000 were eventually built. The Mosquito was used in many roles from high-altitude photo-reconnaissance through to low altitude bombing raids.

Speed was a hallmark of de Havilland designs and to maintain this reputation the Halford aero-engine company was acquired in 1944. During the war the jet engine was developed in great secrecy by Frank Whittle; Geoffrey de Havilland and Frank Halford were among a select group invited to Cranwell near Lincoln to see prototypes powering a Gloster. Halford was enthusiastic about the new engine and went on to enhance the design. Initial jet powered planes included the Goblin and the Vampire.

In 1949 the Comet flew for the first time, becoming the world’s first commercial jet airliner. Design flaws resulted in a series of crashes and limited its adoption but it remains a key part of the legacy of today’s commercial jets. De Havilland continued to supply the growing airline industry with other planes such as the DH 121 which went on to become the Trident.

Sadly, the de Havilland business started to fade once Sir Geoffrey had retired. The business became part of Hawker Siddeley in 1960 and British Aerospace in 1977. Innovation at Hatfield continued with notable successes such as the BAe146 in the 1980s.

The business had an impact on the A1 by resisting incursion of its site when upgrade to motorway was planned – ensuring the necessity for the Hatfield tunnel opened in 1986. However, activities at the site finally came to an end in 1993.

As we see up and down the Great North Road one must never become too sentimental as new uses arise for the spaces which had very specific meaning for previous generations. The Comet is still a hotel but seems likely to find a new lease of life as part of a student accommodation development. The derelict de Havilland site became a film set for the making of Saving Private Ryan and the Band of Brothers series! 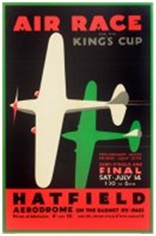