Buckden Palace sits directly alongside the Great North Road between St Neots and Peterborough. In medieval times it straddled the road with the Bishop’s Palace and Little Park to the east and the Great Park to the west. Until Buckden was by-passed in the 1960s it was a prominent landmark for all those travelling this route.

If you are hurtling along the A1 through Cambridgeshire it remains an ideal spot for 30 minutes rest and reflection. The gardens are open, free of charge. 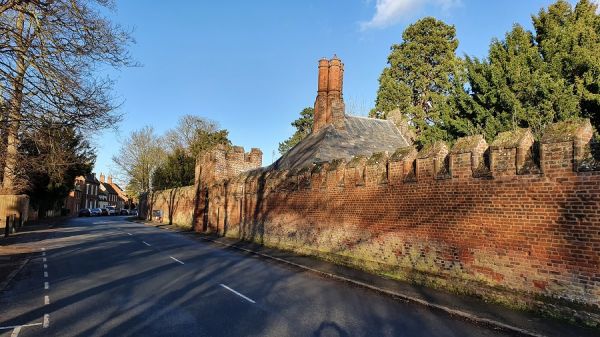 There was a manor at Buckden belonging to the Bishop of Lincoln as long ago as the 11th century. Bishop Hugh of Avalon often stayed at Buckden and after his death in November 1200 his body lay “with great mourning” in the adjacent church as it was conveyed from London to Lincoln.

Soon after signing the Magna Carta in 1215, King John granted Bishop Hugh de Wells permission (and funds) to rebuild his residence at Buckden, create a deer park and replace the Saxon church.

The tall brick tower, outer bailey and moat which are visible today date from the late 15th century. 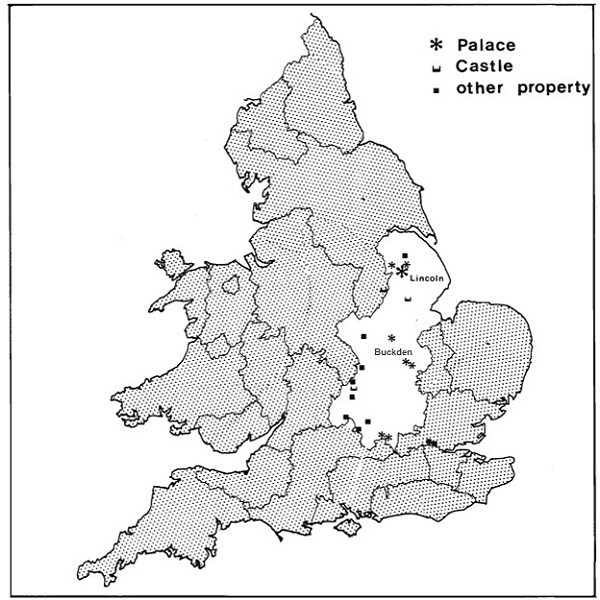 As well as the influential medieval bishops of Lincoln, Buckden Palace was visited by royalty in 1248 (Henry III) and 1291 (Edward I). During the Tudor period and beyond there were regular high-profile visitors whose journeys must have taken them along at least parts of what we know as the Great North Road.

Lady Margaret Beaufort, 1501
The mother of Henry VII wrote to Oxford university from the Episcopal Palace at Buckden, where she was staying for the summer, saying she was ‘credybly enformed’ that one Richard Wotton was ‘a right hable and convenient person’ for the office of ‘gentilman bedell in Diuinite within your uniuersite’.

Thomas Wolsey, 1514
Wolsey was briefly bishop of Lincoln before being elected as Archbishop of York and, in the following year, appointed as a Cardinal. On 6th March he officiated at the ordination of a number of clergymen

Katherine of Aragon, 1533-34
Between July 1533 and May 1534 immediately following Cranmer’s ruling that Henry VIII and Anne Boleyn’s marriage was valid. Katherine was later transferred to nearby Kimbolton Castle where she died in 1536 and was then buried at Peterborough Cathedral.

Henry VIII & Catherine Howard, 1541
They stayed at Buckden Palace during a summer tour before Catherine’s coronation. She was later accused of committing adultery with Thomas Culpeper during this tour, resulting in her execution the following year

James I, 1619
On 19th [October], we find the King at Sir Oliver Cromwell’s at Hinchinbrook. At about the same time, Dr George Mountaigne, Bishop of Lincoln, “entertained the King nobly at his house at Bugden”. (Nichols,1828)

The Prince Regent (George IV), 1814
He was driven from Burleigh on the Hill, near Oakham, past Norman Cross Prison to visit the Bishop of Lincoln at his seat in Buckden on 10 January. 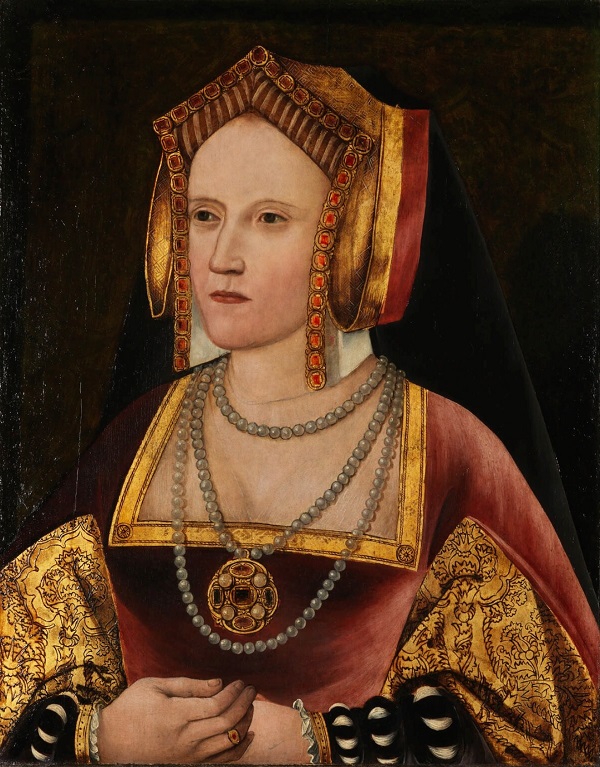 The 48 year old Katherine was brought to Buckden in the summer of 1533 from Ampthill, Henry VIII having taken Anne Boleyn as his bride and queen. In December the king sent commissioners to enforce the new title of “Princess Dowager” upon Katherine.

“She protested with open voice that she was your Queen, and would rather be hewn in pieces than depart from this assertion. She refuses the name of Princess Dowager, and resists her removal to Somersham because of her health”.

Katherine remained at Buckden, albeit with a much-reduced household. Many of her servants refused to swear an oath to refrain from calling her “queen” as they considered to do so would amount to perjury. As a result, a significant number were “driven away with great harshness”, others were imprisoned. According to Nicolas Harpsfield she “spent her solitary life much in prayer, great alms and abstinence.” In May 1534 she was moved to Kimbolton Castle where, after a period of illness she died two years later.

Bishop Hugh of Wells built a new manor house at Buckden in around 1225 replacing an earlier timber structure, with one of his successors adding a Great Hall. These buildings were destroyed by fire in 1291 and it was not until the late 15th century that the brick built residence seen today took shape. The Tower was completed by Bishop Rotherham in 1480. The inner gatehouse displays the arms of Bishop Russell (1480-1494). The new chapel was the work of Bishop William Smith (1495-1514). 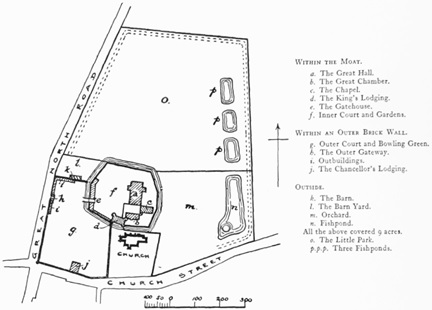 Plan of Buckden Palace and grounds as it was during the Tudor period  (A History of the County of Huntingdon: Volume 2, ed. William Page, Granville Proby and S Inskip Ladds)

After a high-profile 16th century, the fortunes of Buckden Palace started to fade. While there were periods of refurbishment and repair, funding was sometimes inadequate and during the Interregnum its ownership was taken away from the church. Once restored to Lincoln the bishops returned – including Bishop Thomas Barlow (1675-1691), known as the “Bishop of Buckden” who only rarely if ever visited Lincoln where the bishop’s palace had been damaged in the Civil War.

By the end of the 18th century the Palace was falling into disrepair. John Byng visited Buckden in 1790 staying at the The George inn:

“I had often try’d in vain to see the inside of the Bishop of Lincoln’s Palace at Buckden and now unexpectedly succeeded; its appearance is castellated and within the walls certain strong turrets with apertures. This ancient appearance diminishes hourly as much of the moat has been lately filled up and many walls pulled down. The interior is grave, strong and useful; something to venerate; a good dining parlour, a neat chapel, tower stair cases and some stained glass in the windows.” 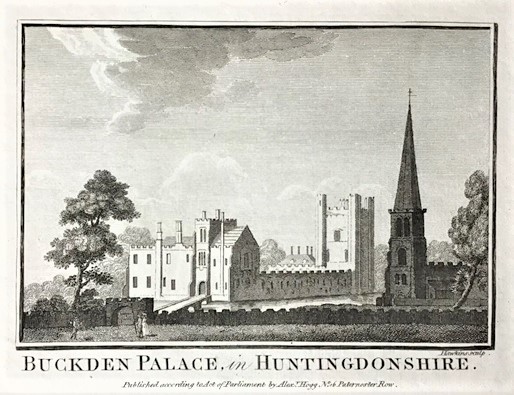 Engraving by Hawkins published in “The New British Traveller” in 1784.

Parts of the buildings were demolished in 1838 and materials sold to generate revenue for the Ecclesiastical Commissioners. The sale of furnishings in November 1838 lasted for 3 days and was attended by nearly 1,000 people. In 1842 the Palace and Park were conveyed to the Vicar of Buckden. Part of the main building was used as an elementary school for girls and infants.

The house now known as Buckden Towers was built on the north side of the inner courtyard in 1872 by a private owner, and in the 1920s another owner spent time excavating and reconstructing parts of the old Bishop’s Palace and gatehouse. During the First World War it was used as a convalescent hospital and during the second it was home to evacuees from the London Blitz. In the 1950s it was gifted to the Catholic Claretion Missionaries. After extensive renovation in the 1980s the site is now used as a conference centre and retreat. 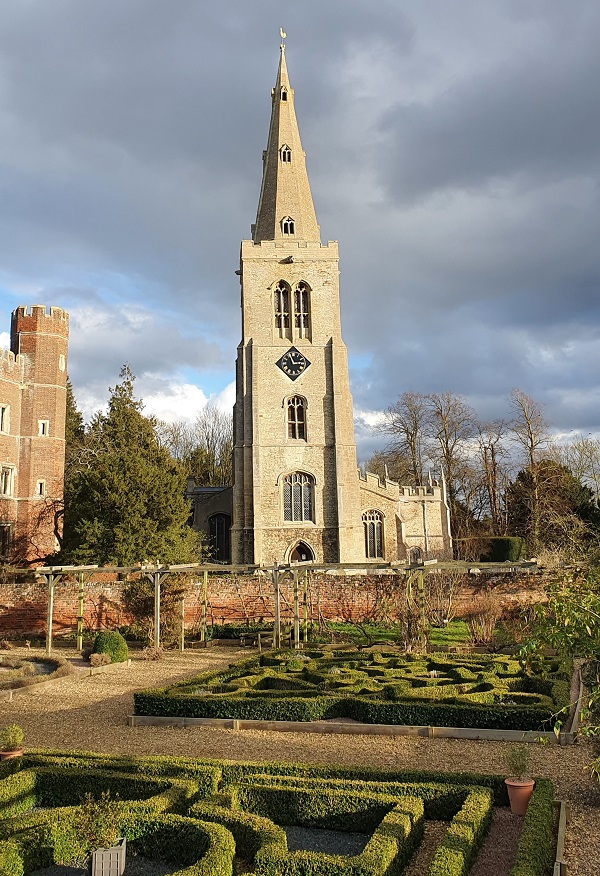 In the 1990s local people and volunteers created the delightful Queen Katherine’s Garden. It is a walled garden giving stunning views of the Great Tower, Inner Gatehouse and St Mary’s Church. It is a replica of an enclosed Knot Garden typical of a small manor house of the Tudor period. The square beds (knots) around a central fountain are planted in the form of contemporary designs. Behind a tunnel arbour, beds feature the York and Lancaster roses. A raised gazebo provides an ideal vista of the garden and the Palace.

Buckden has a greater claim than many villages to continuous occupation since prehistoric times. A Bronze Age cremation cemetery has been found. Traces of a Roman villa have been found close to the centre of the village. And a recent excavation south-east of the Buckden roundabout revealed a succession of features including multiple Saxon houses and one of the largest Saxon halls ever found.

Domesday records “Bugedene” as being owned by the Bishop of Lincoln and including a mill and a church.

The Saxon church was replaced by Hugh de Wells in the 1220s; the chancel walls and south porch date from this time. Much of the current Parish Church of St Mary is little changed from when it was rebuilt between 1435 and 1440 by Bishop William Gray. 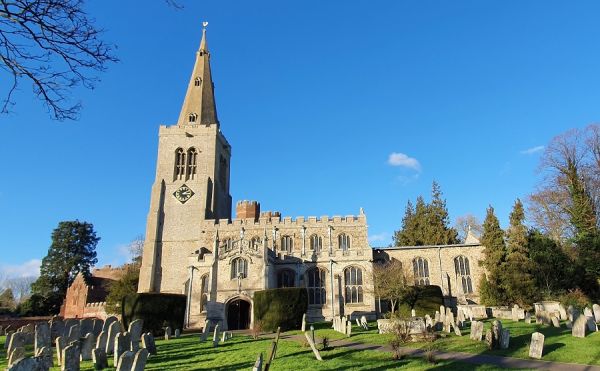 The road through Buckden was turnpiked in 1725 as part of the Alconbury Turnpike Trust. A branch of this road ran to Huntingdon via Brampton. As the Great North Road developed Buckden was a popular stop on the coach road, with access to both the eastern arm via Royston and Huntingdon, and the western route via Biggleswade and St Neots. There were four coaching inns – The Lion, The George, The Spread Eagle and The Vine. The Lion has a ceiling boss which is dated 1500; in former times it was known as the Lamb and then the Lion & Lamb. Cartwright, a one-time landlord of the George, was a popular character who also drove the York Express daily to and from Welwyn. The George originally had a courtyard with galleried wings.

Regular coaches would have made Buckden a busy place throughout the day. Robson’s trade directory of 1839:

In addition coaches from the North pass through Buckden almost hourly. 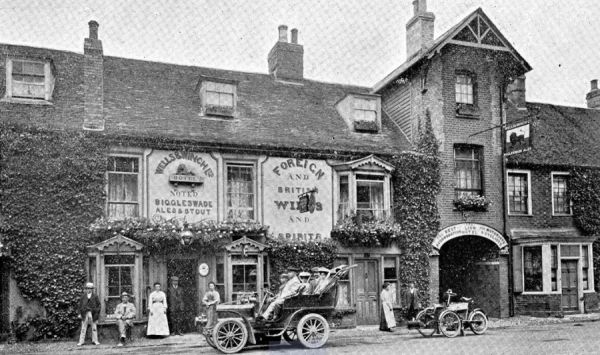