For 350 years The Queen’s Cross was a prominent landmark close to the Great North Road just north of Stamford. Until destroyed by Cromwellian forces it stood to the south west of the road on higher ground then known then as Anemone Hill between Stamford and Great Casterton. The date of its demise suggests that the image above involved artistic licence.

Captain Richard Symonds of the Royalist army visited Stamford on his way from Newark to Huntingdon on Saturday August 22nd 1645. He wrote:

“In the hill before ye into the towne stands a lofty large cross, built by Edward I in memory of Eleanor whose corps rested there coming from the north. Upon the top of this cross these three shields shields are often carved: England; three bends sinister; a bordure (Ponthieu); Quarterly Castile and Leon”

The base of the Stamford cross was excavated by local antiquary, William Stukeley, vicar of All Saints in 1745. He had long suspected that a tumulus on the Casterton Road marked the base of the cross, and when the turnpike surveyor began digging in the area for road stone, he was able to excavate the foundations. His reports describe the base as having 6 or 8 sides, and a number of decorated stone fragments were removed. 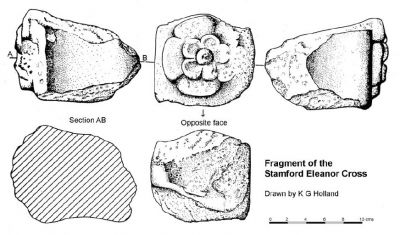 This was one of 12 “Eleanor Crosses” erected by a disconsolate Edward I after his wife died in 1290.

Edward had married Eleanor, daughter of Ferdinand III of Castile, in 1254. Their marriage was politically unpopular, yet notably successful in personal terms, and the couple had 16 children. Eleanor accompanied Edward on a crusade, is reputed to have saved his life at the siege of Acre in 1272, and was travelling north with him to fight the Scots in November 1290. Eleanor was 45 when she died following a fever. After three days of mourning at Harby, she was taken to Lincoln where her body was embalmed. Her viscera were buried in the Angel Choir of Lincoln Cathedral.

The cortege set off from Lincoln heading to Westminster Abbey in London. Eleanor’s coffin was carried by horse drawn cart; Edward accompanied on foot as a mark of respect. After passing through Grantham then Stamford a strangely circuitous route was chosen. It was early December and heavy rain meant the Nene and the Ouse could not be passed on the more direct Ermine Street. As a result the procession headed inland towards the royal hunting lodge near Geddington in Rockingham Forest. From there, it headed south via Hardingstone (Northampton), Stony Stratford, Woburn, Dunstable, St. Albans, Waltham, and Westcheap. 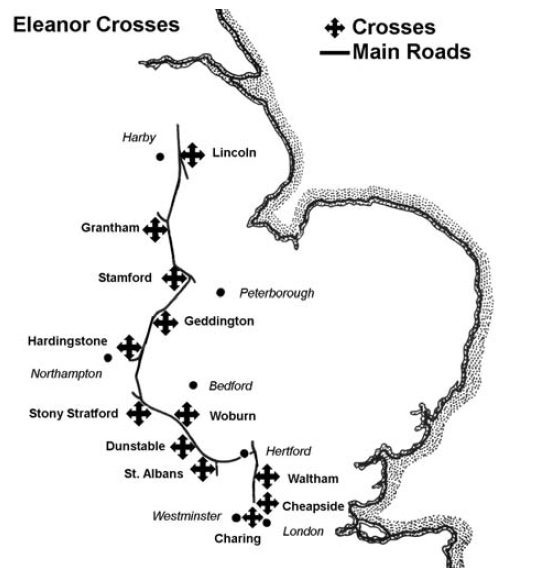 At Westminster she was buried at the feet of her father-in-law King Henry III. Her heart travelled with the body and was buried in the abbey church at Blacfriars.

Edward requested that Richard Crundale, his Master Mason, provide a basic design for a cross to be erected in 12 of the 15 resting places. Of the 12 crosses erected, only 3 remain – Geddington, Northampton and Waltham Cross. (The cross at Charing Cross is in fact a replica.) Each cross had a flight of steps and was built in three stages, the first stage consisting of 3, 6 or 8 sides bearing carved heraldic shields of England, Castille, Leon and Ponthieu.The second stage was a platform upon which stood as many statues of Eleanor as there were sides. A tabernacle encased each statue to give the impression of a shrine. The third stage continued the column and was surmounted by a cross. 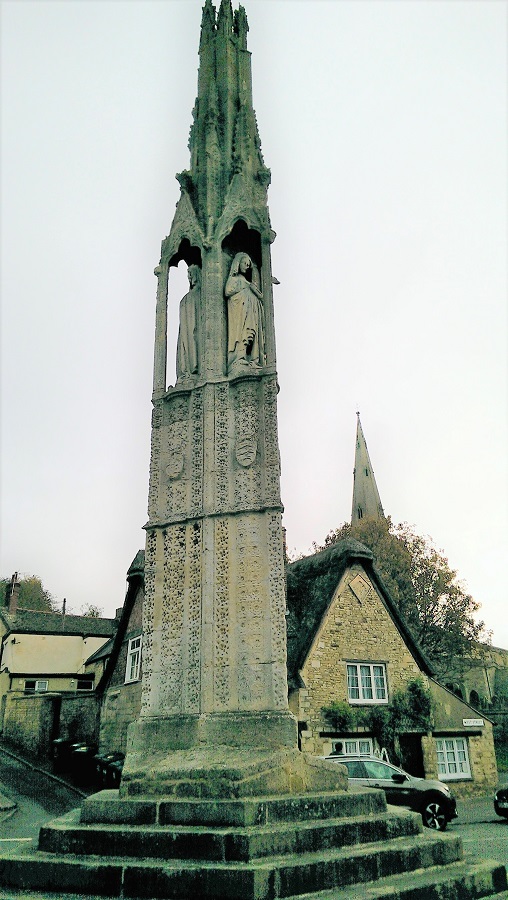